There are no mistakes in Illuminati or its supplements. If something seems wrong, it's simply because you don't understand what's really going on . . .

Illuminati (all editions later than May 1999)

As far as we know, there are no errata in editions printed after May 1999.

How to identify this edition: It's the one with the approximately 5" × 8" box and the full-color cards. Or you can look at the copyright date.

Remove the entry for New Turn Sequences (p. 9) from the table of contents; you're not cleared for them.

Semiconscious Liberation Army: The arrow should be incoming, not outgoing.

United Nations: The side arrow should be incoming.

How to identify this edition: It's the one with the approximately 9" × 12" box, the pink-and-white cards, and the plastic money chits. Or you can look at the copyright date.

We really think this one was bug-free :-)

How to identify this edition: It's the one with the approximately 9" × 12" box, the pink-and-white cards, and the cardboard money chits. Or you can look at the copyright date.

Enemy agents sabotaged Figure 2 in the first printing of the Deluxe Illuminati rulebook. In that figure, the South American Nazis card should be turned around so that its incoming control arrow connects to the outgoing control arrow of the Illuminati.

P. 14 should say that the Assassins have a +4 to neutralize. On many copies, their agents have changed that to +6 in order to terrify and intimidate their foes. But the card is right; it is a +4.

Orbital Mind Control Lasers: The card would have been clearer if it had read "Once per turn, owner can add, remove or reverse an alignment of any other card in play." This card may be used only during the owner's turn, and the change lasts for one turn only.

When two cards are played and one contradicts the other (e.g., Assassination and Murphy's Law, the last card played is the one that governs. 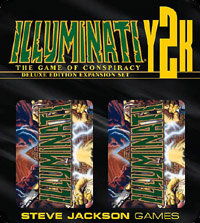 This is the first supplement to the 1999 and later ("Deluxe") editions of Illuminati; it has 109 full-color cards.

Several of the Special cards have numbers in parentheses after the title. Ignore these. You don't see them; they are not there; they mean nothing at all.

Many people have asked whether the "Criminal" and "Weird" tracks on the gameboard have somehow been switched. That's a very good question. Fnord.

We're not aware of any errata in these sets, and by now you'd think we would know . . . unless the evidence has been mysteriously hidden somehow . . . Naaaah, couldn't happen.

This was Expansion Set 3 in a new edition, with the gameboard fixed and a neater title.

This is the second supplement to the 1999 and later editions of Illuminati; it has 110 full-color cards.

The 2012 printing, which will be in stores in July (give or take a bit) has no known errata.

Many copies of the game contain misplaced fnords that will prevent you from seeing the list of "Media" cards used when you play with the Brainwash expansion. These are: Bloggers, Cellular Phones, Embedded Media, the Ghoul Channel, Ninety Minutes, Offshore Call Centers, Reality Shows, Science Alarmists, Screen Savers, Ultrahypermegaplexes, Voice Mail, and Webcams. 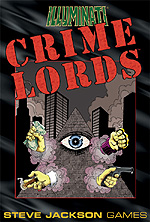 Q: Suppose the Church of the SubGenius loses an entire arm of its Power Structure to an attack. Does it get 10 MB for each Group it lost, or just 10 MB total?