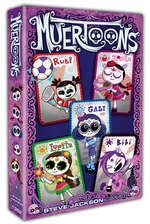 AUSTIN, Texas (October 30, 2014) – Steve Jackson Games is teaming up with Muertoons LLC and Surge Licensing, Inc. to bring a bit of Dia de los Muertos to your gaming table! Muertoons Mix-Up, a card game based on the new animated series Produced by Wilmer Valderrama and created by Eric Gonzalez & Erich Haeger, lets you follow the Muertoons to the Dia de los Muertos celebration, despite Tio Rico's best efforts.

"We love the cute, slightly spooky style of Muertoons," said Phil Reed, COO of SJ Games. "We're excited to give the fans a game that's just as fun and whimsical."

"The Muertoons are a dash of tradition with a whole lot of fun," said Erich Haeger, co-creator of Muertoons. "This game brings their unique world in to your own home and turns any game night into a Dia de Los Muertos celebration!"

"As Muertoons is brought to life through various forms of entertainment and media, we couldn't be more excited to 'reincarnate' our world through game play," said Surge Licensing VP, Elan Freedman. "And there is no better partner in gaming than Steve Jackson Games."

Muertoons is the tale of the not-so-ordinary lives of a group of kids trying to grow up in a world where every day is Dia de los Muertos. Rosita is the caring heart that draws the Muertoons together and finds ways to spread their friendship to others. Gabi always lets her imagination soar and carries her friends on to new adventures. Rubi is a tiny ball of energy with a talent for sports, and she shows everyone that even the smallest can overcome the biggest challenges. Lupita sees the beauty in nature and the world; with Lupita around, goodness is always in bloom. Bibi is the new girl in town and plans to rock the dead world, so if you mess with her or her friends, you better look out! For More Information, please visit www.muertoons.com

Steve Jackson Games, based in Austin, Texas, has been publishing games, game books, and magazines since 1980. Its best-selling game is Munchkin, with well over 5 million copies of the games and supplements in print worldwide. Other top sellers are GURPS (the Generic Universal RolePlaying System), Zombie Dice, and Illuminati. Past hits have included Car Wars and Toon. Steve's very first game, Ogre, originally released in 1977, drew almost a million dollars' worth of Kickstarter support in 2012 for a super-deluxe edition, which was released in late 2013.

The company news page, the Daily Illuminator, is the oldest continuously-running blog on the Internet.

For more about Steve Jackson Games, visit us at www.sjgames.com.