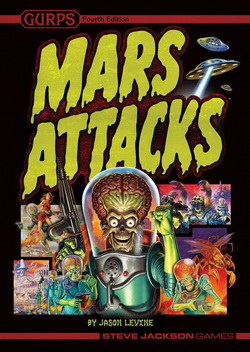 AUSTIN, Texas (May 14, 2015) – Steve Jackson Games and Topps have a successful history of partnering together, particularly where Mars Attacks is concerned. Mars Attacks: The Dice Game was a big hit with fans, and soon Mars Attacks: Ten-Minute Takedown will hit stores, allowing dexterity game fans to destroy Earthling cities too. But what about GURPS fans? Well, now they'll get their chance too, with GURPS Mars Attacks! This book will let GURPS players act out the invasion of Earth, from either the Earthling side or the Martian side!

"It should be no surprise by now that we love Mars Attacks, and that we love working with Topps," said Phil Reed, Steve Jackson Games CEO. "And now we get to share that love with all of our loyal GURPS fans. That's exciting!"

Steve Jackson Games, based in Austin, Texas, has been publishing games, game books, and magazines since 1980. Its best-selling game is Munchkin, with well over 5 million copies of the games and supplements in print worldwide. Other top sellers are GURPS (the Generic Universal RolePlaying System), Zombie Dice, and Illuminati. Past hits have included Car Wars and Toon. Steve's very first game, Ogre, originally released in 1977, drew almost a million dollars' worth of Kickstarter support in 2012 for a super-deluxe edition, which was released in late 2013.