This summer, it may be hot outside . . . but we'll freeze your blood! Our "Summer of Horror" will include more than a dozen different releases. Start a Horror campaign . . . or bring an element of mystery and fear into some other kind of game. Start with the new edition of GURPS Horror, edited and revised by Ken Hite, and go as far as you dare . . .

Vampires. Mad Slashers. Things Man Was Not Meant To Know. Stalkers of the night. The stuff of nightmares . . . All the spine-tingling thrills of your favorite horror movies or books are brought home, with one frightening difference – this time they're after you. 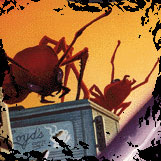 Alien invaders! Giant lizards from another age! Flesh-eating zombies! Colossal insects! Mad scientists! Blobs! Only you can defend humanity, civilization and the American Way from these terrible horrors.

The creatures of myth are real. The vampires, the warlocks, the shape-changers and dopplegangers, the ghosts and trolls, and more. They're real . . . they're here today . . . and they're organized.

There are places in this world that are just bad. Haunted houses, abandoned cemeteries, desecrated churches . . . even whole ghost towns. Whether corrupted by human wickedness, haunted by demons, or blasted by powers from beyond, these are places that draw death and madness. They are magnets for evil . . . and for heroes. The mysteries must be solved, the corruption burned out, the menace revealed to the world.

Huge, dark, and deserted . . . four stories of dusty rooms, creaking staircases, shadowed halls . . . plus basement, turret, and carriage house. A whole adventure site in one package. Includes notes and adventure seeds as both the grim "haunted house" and the original "luxury mansion."

Four cardstock pages are all that stand between you and your rabid players . . . On the front is the full-color art from the four new "Summer of Horror" covers, by Christopher Shy. On the back is a selection of GURPS charts and tables chosen especially for the Horror GM, with special attention to Fright Checks and magic.

They chase you, baying, through woods far from home. They lurk in the shadows to grab the unwary. They possess your friends and change them subtly. They smash through your bedroom wall and are on you before you can even scream. But you scream anyway. 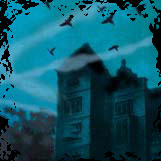 The creatures of the Other World are all around us. Some were once alive. Some were created by human imagination. And some are completely inhuman but thirst for our souls. 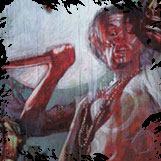 Undead covers everything from subtle hauntings to undead necromancers, from Gothic vampires to the brain-eating zombies of the B-movies. Inside you will find a history of the undead, guidelines for creating your own undead (including animals, plants, microbes and even vehicles) and a dozen classic undead archetypes with variants and sample characters.

Warehouse 23 is full of ideas for horror roleplaying. If you dare, enter here to see dozens more games and adventures.