This guy has your back -- and your dice, too! He'll guard them as if they were his own.

Carry your dice in style using this large, satin-lined dice bag with room for over 100 dice of all different shapes and sizes! Featuring custom art that perfectly accents any tabletop game, this cybernetic dice bag will power you through your next game night. 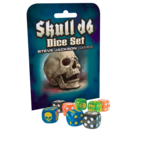 Raising a horde of skeletons is harder than it sounds. Scouring ancient crypts for forbidden tomes . . . hours of endless chanting . . . so many candles! The

Carry your dice in style using this large, satin-lined dice bag! Featuring custom art that perfectly accents any tabletop game, this whimsical dice bag with a silver lining will bring you luck at next game night. You provide the faerie dust! 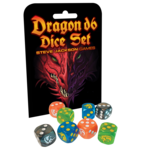 Harness the magic! In a forgotten cave in a far-away land, we found a dragon’s egg. Nurtured on a bed of smoldering embers, it finally hatched . . . and these brightly colored dice spilled forth! That's our story, anyway. These eight pearlized dice come in all the popular dragon colors: green, black, orange, and blue; you'll get 2 of each color in this set of 16mm dice! 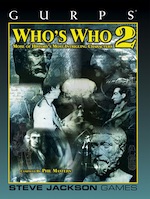 GURPS Who's Who 2 (Reprint)

The second volume of 52 real-life characters for historical and time-travel games introduces an even more varied collection of personalities.

Through brilliance or luck, charisma or courage or sheer lunacy, these are the people who stamped their very different images on history. When your players face them, in battlefield, court, or laboratory, they can change the world – or at least, come away with quite a story.

Each character is represented by a full GURPS character sheet, biographical notes, and scenario ideas from the subtle to the bizarre – ready to use in games, or adapt as NPCs or role-models. 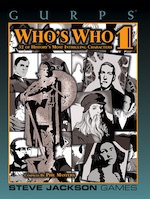 GURPS Who's Who 1 (Reprint)

This book gives complete descriptions and character stats for 52 of the most interesting people in history, ready to serve as patrons, allies, enemies, or role-models. From the man who united China to the REAL Dread Pirate Roberts; from the voice of an empire to a roistering aristocratic astronomer with a silver nose; from a doctor so brilliant that his foes ran him out of town, to a king with 1,200 wives but not a single heir!

It's written for GURPS, but it's easy to translate into any system. 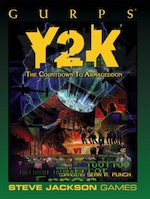 The world DIDN'T end on January 1, 2000. Therefore, this book is good for gaming, rather than just for starting fires. And you know what? We're GLAD.

Now that it's just fantasy, visit the world that might have been . . . the world where everything went wrong.

The Big Crash. The Bug. The end of technology – the end of humanity. In GURPS Y2K, ten of your favorite GURPS authors take a long look at these millennial fears, from computer crashes to global warming, from a nuclear apocalypse to the Biblical Apocalypse.

Are you Y2K compliant? 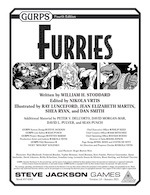 Lions And Tigers And Bears – That's Us!

Two seconds after the first humans met the first animals, people started to blur the lines. They imagined animal-headed gods, talking beasts, totem animals, and human-animal hybrids, and also used beasts as symbols for human traits . . . all of which eventually gave rise to "funny animal" cartoons and finally the full-fledged anthropomorphic animals found in modern-day animation, comics, games, and novels. These beings and others like them are commonly labeled furries.

GURPS Furries brings this wonderful world to your game. It provides game-mechanical guidance on creating suitable templates for "furry" characters – from the biologically plausible, through the fanciful, to the cartoonish – and backs that up with a long catalog of examples suited to a wide variety of genres. Beyond the stats, it gives advice on integrating these beings into your campaign in background roles, as a major presence, or as the primary focus.

Because humans could stand to learn a thing or two about being civilized. 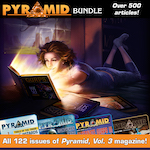 Each issue is devoted to a theme: monsters, psionics, martial arts, spaceships . . . and many more. Spice up your campaigns for GURPS Dungeon Fantasy, GURPS Action, GURPS Monster Hunters, and just about any other genre you could imagine. Over 500 articles from beloved GURPS authors and talented newcomers.

It's a bundle of joy bigger than your imagination. Get your gear together; the Pyramids await!