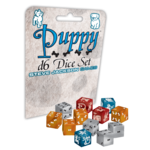 Featuring the art of Katie Cook, this set of twelve 16mm six-sided dice adds cute puppies to your favorite game! Take the dogs for a walk . . . or roll, at your next game night, with dice featuring bone and puppy engravings on each side. When you open your dice bag, people will know it was YOU who let the dogs out! 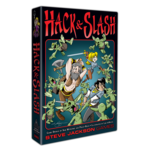 In this quick game, your guild of adventurers is ready for anything: battles, rescues, and the "liberation" of whatever pays the most. Choose a quest and roll the dice! You may win fame, and even recruit a new comrade for your party. Or you may fail, and slink back to the Tavern. 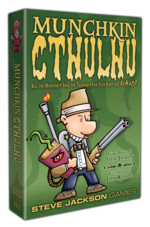 Munchkins have hacked their way through dungeons, kung fu temples, starships, haunted houses, and super-foes. Now they face their greatest challenge -- Cthulhu! Will they survive? Will they retain their sanity? Will they . . . level up?

Munchkin Cthulhu is a stand-alone game that lampoons Lovecraft's Mythos and the horror gaming that surrounds it. Brought to you by Steve Jackson and John Kovalic, this set features four Classes -- including the Cultist -- and a lot of classic monsters from outside reality. And they all have Stuff you can take from their twitching bodies.

You can play Munchkin Cthulhu by itself, or combine it with any number of other Munchkin games for mind-bending silliness. 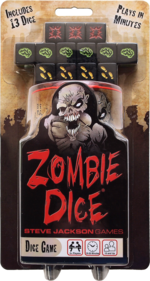 You are a zombie. You want braaains. More brains than any of your zombie buddies.

Zombie Dice is fun for any zombie fan (or the whole zombie family). The 13 custom dice are your victims. Push your luck to eat their brains, but stop before the shotgun blasts end your turn!

It's a great quick game. Play it at lunch (braaiiiiiins!) or while you're in line for a zombie movie . . . !

Two or more can play. Each game takes 10 to 20 minutes, and can be taught in a single round. 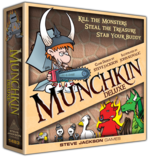 What makes this edition "deluxe"? It's got a big gameboard to keep your decks in place and 12 standies (six male and six female) that you move on the gameboard as you level up!

Fast-playing and silly, Munchkin can reduce any roleplaying group to hysteria. And, while they're laughing, you can steal their stuff. 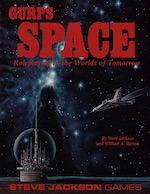 The Future Is Yours!

At last . . . the star-spanning sourcebook for the Generic Universal RolePlaying System. In the 128 pages of GURPS Space, you'll find:

GURPS Space does not tie your game to a single background. Rather, it is designed for the creative GM who wants to develop their own universe! This book presents a wide variety of choices and background information, to let you recreate your favorite science fiction background – or build your own, from the homeworld out.

Years in the making, GURPS Space is essentially a survey of the whole space-adventure genre as it relates to roleplaying. If you're ready to create your own future . . . it's yours.

This book is designed for use with the GURPS Basic Set, but can be used as a sourcebook for any roleplaying campaign in outer space.

(This is a digital reprint of a supplement designed for GURPS prior to Third Edition.) 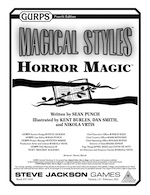 Magic Man Was Not Meant To Know

Despite its "set piece" sorcery and limited flexibility, the main magic system in the GURPS Basic Set and GURPS Magic offers a major advantage: Effects are spelled out clearly ahead of time, meaning no spell-creation mini-game and relatively few arguments at the gaming table. This degree of predictability is great for games with fireballs and dragons, like hack 'n' slash fantasy, but not suited to every genre that features the supernatural.

GURPS Magical Styles: Horror Magic uses the tools of GURPS Thaumatology: Magical Styles to adapt this system to genres where magic is supposed to be a secret – likely a creepy one, if not evil. Cult Secrets is a style for secretive wizards who don robes to carry out ceremonies under cover of darkness, usually in the name of a demon or dark god. The Dark Path, on the other hand, is followed by loners who delve into forbidden books to show their detractors the price of laughing at their ambitions. And Forgotten Wisdom suits traditionalists whose problem is largely one of image . . . but who aren't above cursing enemies.

Ultimately, it isn't about the spells you cast but who you damn to Hell when you cast them – which could be you, if you aren't very, very careful!