In the battle for the Mortal Realms, you need to know just how strong your opponents are . . . and how well you stack up against them. You'll have that information at your fingertips with the two-sided Munchkin Warhammer Age of Sigmar Kill-O-Meter. Turn the dials as your combat strength goes up or down so you always know how tough you really are . . . or flip it over and use it for the monsters! This set also comes with four new Munchkin Warhammer Age of Sigmar cards. 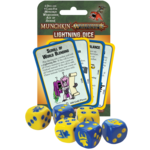 They say lightning never strikes the same place twice . . . but how about six times? These supercharged dice will bring the thunder to any Munchkin game . . . and they come with four new Munchkin Warhammer Age of Sigmar cards!

Decades ago, in a glorious age known as The Eighties, Steve Jackson set off on his own to design and publish games, game accessories, and gaming magazines. In the early years of Steve Jackson Games, Steve and his crew created a storage solution for games that was far, far superior to the simple zipper lock bags that so many micro games were released in at the time.

Now, Steve Jackson Games is proud to bring back the Pocket Box, that eighties signature of the company that was the home for such classics as Car Wars, Illuminati, and Ogre. But those games are not included in this package.

The Classic Pocket Box Games Bundle includes the forgotten Pocket Box games of the eighties. Undead. Necromancer. One-Page Bulge. Raid on Iran. Kung Fu 2100. Games that have been out-of-print and unavailable for decades are available once again, all in retro-inspired packaging and in as near-exact reprints of the originals as we could manage.

BONUS: Also includes the green Pocket Box edition of The Awful Green Things from Outer Space, a gaming classic back in its 1988 form and in excellent condition!

No longer do you have to pay those high prices for these rare, out-of-print gems. With this bundle. your game collection expands with six classic Steve Jackson Games titles! Munchkin Pathfinder fans, expand your adventure possibilities with the 20 new Dungeon cards in Munchkin Pathfinder 3 – Odd Ventures! These Dungeons are based on the best-selling Adventure Paths for the Pathfinder Roleplaying Game from Paizo Inc. We've also delved into the game to find the most (in)famous gates, doorways and other passageways to use for the Portal cards. Your heroes will be going on some very Odd Ventures indeed! 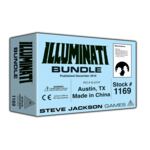 The Classic Game of Conspiracy and Conquest! This bundle came to life during our recent Pocket Boxes of the Eighties Kickstarter. All the Illuminati goodies you really really want, all neatly packaged in this attractive heavy-duty box. The Illuminati Bundle contains the following reproductions of the original releases from the eighties: Illuminati, Illuminati Expansion Set 1, Illuminati Expansion Set 2, and Illuminati Expansion Set 3. We've thrown in an empty Pocket Box for good measure, along with two Illuminati pocket folders! * The Pocket Box games are all reproductions of the original releases from the eighties! * The Pocket folders have original Illuminati art by David Martin (1981 and 1982). * The classic game of conspiracy and world conquest . . . * Expanded to include membership in the Bavarian Illuminati, and . . . * Introducing The Orbital Mind Control Lasers, and . . . * Use Brainwashing and Propaganda. The whole world is your plaything! 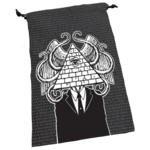 What should you do if you have too many dice? (Well, that’s silly, because you can NEVER have too many dice!) But what you COULD do is pick up this dice bag! This striking (and roomy) Illuminati-themed dice bag will help you keep all those treasures right at your fingertips. The drawstring bag is made of gray fabric, lined with black satin, and holds more than 100 assorted dice! This 6” x 9” bag will be a valuable addition to your next game day, no matter where you play! 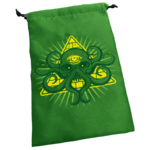 So many dice ... What's a gamer to do? This distinctive dice bag will help you keep all your riches (and dice) together, no matter where you are! The drawstring bag is made of green fabric, lined with black satin, and holds more than 100 assorted dice! This Cthulhu-adorned 6" x 9" bag will come in handy on your next game day!