Between Illuminati cards that didn't make it into the new edition, INWO cards that deserved translation, and new ideas, we had enough for a 125-card supplement. So here we are with another helping of disinformation . . . Alternative Truths. Yes, this set includes the New World Order cards and the Artifacts! So Shangri-La, can use the Spear of Longinus during a period of "Fanatics Unite" to take over the suddenly cooperative Paparazzi with the Special Persecutor. Now imagine what the daily news looks like . . . This set includes 125 game cards (including three blanks for you to make up your own cards), rules for the two new card types, and a reference sheet for the new Illuminati, Shangri-La. This is not a stand-alone game. It is a supplement for Illuminati Second Edition. 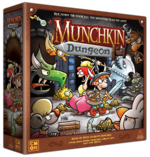 Quest through the Dungeon for adventure, glory, and, of course, a chance to betray your friends!

Based on the hit card game Munchkin®, Munchkin Dungeon is a competitive, push-your-luck dungeon game. Each round, you explore further, seeking Loot, Fame, and foes to defeat. But be careful! The deeper you delve, the better the rewards, but the Monsters get stronger and your back-stabbing "friends" will add even more danger.

And of course, it wouldn't be a Dungeon with a capital D if there wasn't a Boss at the final level, ready for an epic battle. Beat it and gain Fame. Lose, and get kicked back to the beginning. When the final Boss falls, the most famous Munchkin wins! 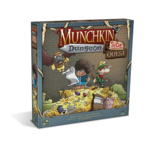 Side Quest is an expansion for the Munchkin Dungeon board game, for all adventurers willing to stray from the main path. Seek out new challenges, more Fame, and new ways to improve your character as you delve through the Dungeon and kick open some doors!

Four new Heroes join the fun, together with now Loot, Threats, and six new Roaming Monsters to defeat! Fifteen different Side Quests await those brave enough to complete them, each giving a new Level as reward, making Heroes stronger, more powerful and, most importantly, more famous!

Let them know who is the greatest side-quester in the Dungeon! 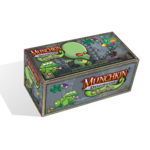 Munchkin Cthulhu is an expansion for the Munchkin Dungeon board game for adventurers not afraid of going a little mad! Face 4 new otherworldly Roaming Monsters, walk across slime-covered Rooms, and gather now Loot perfect for fighting interdimensional threats! But beware: not only will your Madness increase with each Room, but The Great Cthulhu itself is waiting for you in the Boss Lair! Will you be able to fight to the end, or will the terror overtake you? 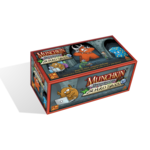 Board Silly is an expansion for the Munchkin Dungeon board game that is our tongue-in-cheek love letter to all the board games and board game collectors out there! Face 4 new Roaming Monsters, lots of dangerous Threats, and the dreaded Meeple Boss, who is ready to show you who is the king of the board! Start your Collection by proudly placing your Loot in the brand-new Shelf Dashboards, keeping it safe from your opponents, and see which collector will gain the most Fame by the end of the game! Munchkin Dungeon Cute as a Button

Cute as a Button is an expansion for the Munchkin Dungeon board game for all Heroes who know that looks are Fame walks hand-in-hand. The set adds 4 new, almost too cute to handle Roaming Monsters and the fearsome-in-an-adorable-way CuteZilla Boss. Enjoy lovely Threats and Loot cards with 2 new mechanics, Cuteness and Pets, to give you more Fame by the end of the game, and keep track of your looks with the new "Who Wants to be the Cutest?" Score Board. It's a cuteness overload! More dungeons! More deadly! In this expansion, 1 to 4 players doodle their way around new dungeons using the custom die to unlock magic doors, collect new loot, and fight more monsters. But watch out for cursed treasure! Do you have what it takes to face Deadly Doodles . . . 2? 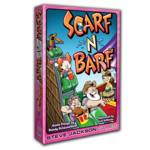 Munchkin has gone to the dogs . . . plus foxes, mice, and ponies!

Anthropomorphic animals have always been popular, from the beast-headed gods of Egypt to Mickey Mouse and Bugs Bunny today. Now you can bring them into the dungeon, fighting off opponents such as the Human Rights Activist, the Robot Vacuum, or even the feared Animal Control Enforcer. Use a Tail Flail or a Cone of Defiance as you work to be the first of your species to reach Level 10!

This set is perfect for new Munchkin fans but also blends perfectly well with original Munchkin or any other fantasy set. The Fantasy Trip: The Book of Unlife

They walk among us.

They are neither alive nor dead. They inhabit the world in between. But all too often the living are their prey.

This book includes 44 creatures for The Fantasy Trip, a guide to the general powers and vulnerabilities of the unliving, and a complete adventure setting, The Haunting of Holner House. 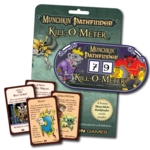 The best Munchkin fights are the ones where everyone plays cards to keep the levels bouncing up and down! But it can be hard to keep track. Now you'll never have to stop and recount again!

With the Munchkin Pathfinder Kill-O-Meter, whenever a card hits the table, you turn the dials to keep track of your new total. You don't have time to stop and count when the goblins are on your heels! Vampires. Immortal and nearly invulnerable, their mystic powers and supernatural servants protect them from danger. They thrive in the darkest hours of night and haunt the dreams of every culture and every age of man. Some merely crave your blood; others drain the very essence of life, leaving you an empty, bitter husk. And they always thirst for more . . .

GURPS Blood Types is a look at the vampire in legend . . . and, yes, in history . . . through the centuries and around the world. It explores dozens of vampiric types, from the traditional Gothic aristocrat to the bizarre African adze to the enigmatic Albanian vyrolakos . . . usable as foes, allies or player characters. Mighty Battles for the Mortal Realms . . . The Eight Realms of Warhammer Age of Sigmar form a new battleground for Munchkin players to explore – by which we mean kill monsters and take their stuff, obviously. First launched in 2015, Warhammer Age of Sigmar has found a home on game tables worldwide. Its rich story and variety of foes are a perfect match for your Munchkin game. Play as a soldier of one of the Armies in the Grand Alliances, as you fight against the numberless minions of Chaos and Death! Best of all, it's completely compatible with Munchkin Warhammer 40,000 and its expansions . . . create a truly epic battle by mixing the sets! GURPS Dinosaurs – the ultimate sourcebook for introducing the "terrible lizards" of eons past to your roleplaying game! Hundreds of dinosaurs, described with complete scientific accuracy (the book has been approved by The Dinosaur Society!). Take a trip back to a time when the toughest player-characters went by another name – Lunch. Welcome to the Past!

GURPS Low-Tech covers the basic tools used by historical adventurers from the Stone Age to the Age of Sail – and still used by modern survivalists and post-apocalypse survivors when the high-tech toys fail.

Weapons and armor from antlers and rawhide to warhammers and heavy mail; adventure and travel gear from simple stone knives to early submarines; everyday items and tools of every trade. Low-Tech starts with the basics that suit any setting . . . and adds lots of culturally specialized inventions to support your campaign's particular flavor. For game masters, the discussions of past technologies – based on up-to-date historical and archaeological research – will be valuable no matter what system is used. For GURPS players, this book also covers the skills and traits that let adventurers make the best use of their equipment.

Whether the heroes are cavemen taking their first steps toward civilization, pirates on the Seven Seas, or anything in between, GURPS Low-Tech has the technology they need! Create a world that could never be! GURPS Fantasy is the complete toolkit to let you build a campaign of heroic deeds and wondrous magic. It discusses the genre in depth – with all its subgenres and inspirations (myth, novels, movies, etc.) – allowing you to handle any kind of fantasy.

GURPS Fantasy gives detailed, concrete advice for assembling fantasy settings – from the basics of the landscape itself, through its inhabitants and cultures, to the details of believable histories and politics. It also examines the nature of supernatural forces and discusses the impact of wizards, monsters, and gods. And, of course, it looks at the many ways that magic and users of magic can work in a fantasy world.

Perhaps most importantly, it advises GMs and players alike on the kinds of characters appropriate to fantasy   including ordinary folks, people with fantastic powers, and nonhumans.

Whether your model is Tolkien, Jordan, or Leiber, this book will let you create a town, a country, or an entire world. The softcover reprint contains the same material, with black-and-white interiors and a lower price.

(This is not an update of the Yrth setting presented in the old GURPS Fantasy for GURPS Third Edition. For that, we have GURPS Banestorm.) An Unscheduled Layover
IN HELL

Ladies and gentlemen, we regret to announce that Flight 13 will not be proceeding to your destination at this time. In fact, we won't be proceeding at all. And neither will you.

Suddenly, the routine of air travel becomes anything but routine. Only the wits and courage of the passengers, and the minimal equipment they can carry, give any chance for survival in a world gone mad.

Flight 13 is a mystery adventure for the GURPS system. It requires only the GURPS Basic Set, Third Edition, but is compatible with any other GURPS modern or futuristic worldbook. In particular, it fits very well with a Space, Horror or Illuminati campaign. When it comes to keeping your labyrinths logical, your monsters managed, and your traps and treasures tracked, you need a plan. You need the Labyrinth Planner! This 48-page book is a blank canvas for your adventuring artistry in The Fantasy Trip, with hex sheets to inspire your overview maps and individual rooms, journal space for encounters and background, and character record sheets to organize friends and foes. Praise to the Hero!

With the Deluxe Character Journal, you'll never forget how amazing you are. This 32-page book for The Fantasy Trip lets you record your hero's abilities and deeds. All the most vital info is at your fingertips in a two-page spread. The book also features extra space to track your valuables, allies, and adversaries, and cities, towns, and labyrinths explored. You can document your adventure highlights and rumors you need to investigate. And speed up play with tables from the Legacy Edition – spells, talents, and weapons are at your fingertips!