Under the dissolute Emperor Caligula, the Roman Senate gets down to serious business: drinking. But they keep on making laws. The usual penalty for disobedience: take another drink!

Can you make laws that will trap your friends into going broke . . . or just not being able to find the table?

This is a drinking game. Please don't buy it – or play it – unless you are of age. 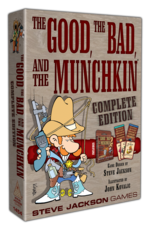 The Good, the Bad, and the Munchkin Complete Edition (Reprint)

Oh, give me a home where the Jackalopes roam
And the Dudes and the Buckaroos play,
I'll slay and I'll loot, give the monsters the boot,
And the dice are not loaded, no way.

The Good, the Bad, and the Munchkin Complete Edition takes on the Wild West! Forget dragons and goblin – Jackalopes and Davy Croc have just as much treasure. Those plains may seem wide open, but there's lots of monsters to kill, and lots of stuff to take.

Become a Cowboy with a Twenty-Gallon Hat, or an Indian on a Catamount. Fight Wild Bill Hiccup, the Killer Jalapeńo, and a Barber Shop Quartet. Take The Annual Bath for an extra level. Or just pal around with your sidekick the Greenhorn, until you sacrifice him to distract a monster.

The Good, the Bad, and the Munchkin Complete Edition is a stand-alone Munchkin game, including all the cards from Beating a Dead Horse and all the promo cards and bookmarks we've ever made for The Good, the Bad, and the Munchkin! Steve Jackson and John Kovalic have teamed up again to put puns to paper like no one else can. Head 'em up and move 'em out, and get ready to wander the Grim Roper into somebody else's combat, and make him Rootin' Tootin' for +10 . . . 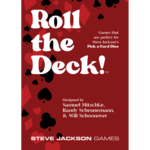 Roll the Deck with Pick a Card Dice!

A small booklet of 11 dice games designed for use with Steve Jackson's Pick a Card Dice and standard playing cards.

The games in this booklet are built around the concept of generating a series of random draws from a standard deck of playing cards. Instead of playing cards, though, we've used our Pick a Card Dice. And so can you! 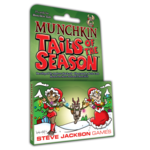 Munchkin Tails of the Season (Reprint)

Your newest furry Munchkin friends are back for the holidays!

With festive art by Katie Cook, these cards are the purrfect addition to your Munchkin Tails game (or any other Munchkin game that needs a dose of Christmas magic)! Even if Christmas is in July . . . ! 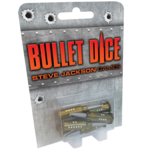 Bullet Dice are the ideal "ammunition" for a great game night!

Unload on your opponents with Bullet Dice! These custom, double-injected dice accurately resemble a bullet and cartridge and can replace any standard six-sided dice. 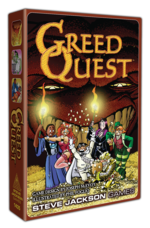 . . . and there's treasure to be won, so what are you waiting for? Three to six players race to the bottom of the dungeon to grab The Hoard. Now all you have to do is get out with it . . . but everyone else is between you and the exit!

Each player has his own deck of cards that control movement. Bluff, scheme, and strategize your way to the head of the pack . . . but some cards will change the rules when you least expect it!

This is a fast, unpredictable game, easy to learn and fun for all ages, with lots of quick replay value. And it's illustrated by Phil Foglio!