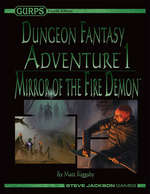 A Reflection of Adversity

An eldritch mirror holds the key to demonic power. Courageous and mighty adventurers must face impossible odds to track it down.

You have to stop those guys from taking the treasure you plan to steal!

GURPS Dungeon Fantasy Adventure 1: Mirror of the Fire Demon presents an adventure for four or more GURPS Dungeon Fantasy heroes built on 250-300 points. As rumors of the mirror's existence spread throughout the land, the heroes must race against time to defeat monsters, overcome challenges, and outwit other adventurers who want to get the ultimate prize first. The heroes need to wander the wilderness, search the sacred grotto, and find the hidden fortress to save the day. This time, getting there may be more than half the battle!

In addition to a complete adventure (with a drool-inspiring treasure table), you also get:

Even if the heroes fight back the forces of darkness, the adventure includes plenty of ideas for follow-ups and spin-offs to keep the action going.

With GURPS Dungeon Fantasy Adventure 1: Mirror of the Fire Demon, the heroes need to face their own dark reflections . . . and keep them from getting the loot! 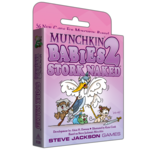 Did you enjoy the sweet feeling of playing Munchkin Babies? Have you been experiencing signs of baby fever? You’re in luck: Munchkin Babies 2 – Stork Naked will give you that newborn feeling again, without any labor on your part! Add this 56-card expansion to your Munchkin Babies game – or any fantasy Munchkin game.

It's all Developmentally Appropriate, and after all that fighting, the babies will surely Sleep Through the Night. 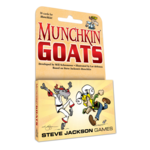 With all the kid-ding around we do, you had to know we’d get to goats eventually . . .

Munchkin Goats is a new mini-expansion that adds a herd of new Doors and Treasures to your Munchkin decks. Be sure to wear your More Hair Coat while you try hopping over the Goat Moat on your way to take down Baphomet! 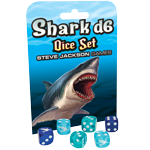 These 16mm dice in cool ocean shades can be rolled any time you need to bring that predator energy to your favorite game! 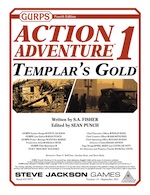 Blast From the Past

GURPS Action is typically set in the present or relatively recent past, but there was plenty of action during the two world wars – and between them. And France was right in the middle of it all. Welcome to Paris, 1919.

GURPS Action Adventure 1: Templar's Gold is a wild race across the devastated and dangerous Red Zone in search of Templar treasure. This pulp adventure boasts codes, conspiracies, fisticuffs, biplane chases, war-surplus weaponry, and explosions. And gold – so much gold.

Be sure to brush up on your Templar lore before you get too greedy . . . 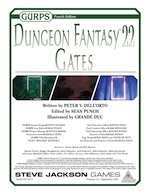 That Was No Door!

Hack 'n' slash fantasy is all about swiping things – and not just loot. Adventures and settings shamelessly steal artifacts, creatures, cultures, and more from any source that seems fun and vaguely compatible, which is why dungeon fantasy is often called "kitchen sink" fantasy. One of the most powerful tools for linking together disparate worlds and justifying the presence of all this unrelated stuff is the gate.

GURPS Dungeon Fantasy 22: Gates is a short-but-intense look at this useful plot device. It explores what gates are, how they work, how to use them in your campaign, and how to manage delvers' interactions with them. As a bonus, it sketches out three sample destinations for such portals, offering an idea of just how weird things can get.

What, you thought you could just turn around and go home? 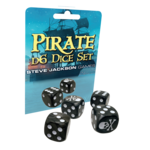 Roll the bones like a real captain! These dice are a treasure worth the hunt.

Known across the seven seas for their looks and luck, the Pirate d6 Dice Set is loaded like a ship's hold with beautifully crafted dice featuring the cross 'n bones of the notorious Jolly Roger.

Avast Ye! Get your hooks, er, HANDS on these today!