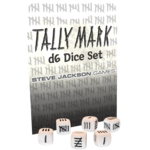 What will you tally with the Tally Mark d6 Dice Set? Dragons slain? Monarchs overthrown? Perhaps Orc lords vanquished, or all the times the rogue betrayed you? So many things to count . . .

Or you could just use them in place of standard d6 to add some flair to any game! (That would be safer.) 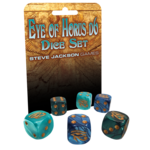 The Eye of Horus watches over you . . . and your dice!

When your dice are adorned with the emblem of a god, no mortal can challenge you. Bless your rolls with the Eye of Horus d6 Dice Set! 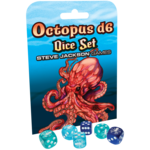 You'll want to get your tentacles, er . . . hands on these dice!

Octopi are fascinating creatures, widely considered to be the world’s smartest invertebrates. But are they smart enough to play tabletop games? We’re sure that if they do decide to play, they’ll use the Octopus d6 Dice Set. Just as you should! 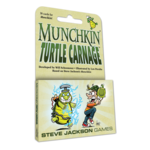 Trust us, it’s Turtles All the Way Down!

In Munchkin Turtle Carnage, we’ve got a shell-load of great new cards for you! Be careful not to wake the Napping Turtle while you battle the undead Riga-Tortoise with your Hot Rock. And always remember, Slow and Steady wins the race to Level 10! 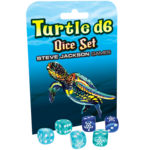 It just might be turtles all the way down!

Bring the beauty and serenity of the ocean to your land-locked gaming table with the Turtle d6 Dice Set! These 16mm dice come in soothing shades of blue and green to add some color to your game table – no scuba gear required! 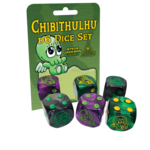 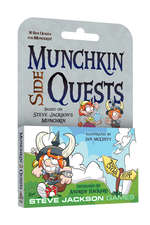 When you need a short detour from the business of killing monsters and betraying your friends, try Munchkin Side Quests! This 30-card expansion can be added to any of your Munchkin games, and it's illustrated by Ian McGinty, who has previously drawn for the Munchkin Collectible Card Game and Munchkin Magical Mess. Get secret in-game goals that you can complete to cash in for a reward AND, just maybe, surprise everyone with a new way to win the game! 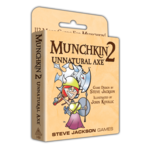 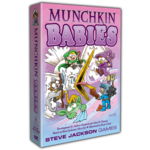 Munchkin Babies delivers 168 cards full of sweet, adorable, baby adventurers . . . who are just as good at backstabbing and loot-grabbing as their elders from Munchkin. Play a cute Orcling, Dwarfling, Elfling, or Quarterling (half a Halfling). Go to preschool to learn your Class: Wiz Kid, Ankle Biter, Crumb Snatcher, or Holy Terror, and then arm yourself with the scariest items from the toy box: the Kazoo of Constant Whining, Kid-Safe Stabbinator, Blame-Resistant Pajamas, and of course, the Extremely Pokey Spoon. You must fight fearsome monsters such as the Jealous Kitty, the Hootin' Nanny, the Napmare, and, worst of all, the Pediatrician! Grab their treasure and crawl your way to Level 10! 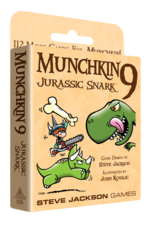 Munchkin 9 – Jurassic Snark takes munchkins to a long-gone era to fight dangers they've never encountered. We were so preoccupied with whether we could, we didn't stop to think if we should . . . but that's never stopped us before! 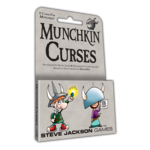 Admit it. You love that moment when your enemy kicks down the door, and the card they draw is – a Curse! Almost as much as you love playing Curses on your enemies yourself. Whether it means losing items, skipping turns, or stumbling across a duck imbued with pure doom, a Curse always brings in an element of gleeful mayhem.

That’s why this mini-expansion contains 12 new Curses, two new monsters, and one Curse Reverse to shuffle into your Munchkin game!

This is an expansion for Munchkin. It is not a stand-alone game. This is NOT a collectible or randomized set. Every Munchkin Curses pack is the same as every other. 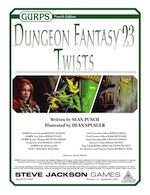 Delve Into the Different

Hack 'n' slash fantasy is "kitchen sink" fantasy. It blends wizards, dragons, and piles of gold with elements pulled from every fictional genre and even real-world history, keeping the parts about fighting and looting while discarding the rest. GURPS Dungeon Fantasy is no exception, reducing all of GURPS to swords, spells, and skullduggery.

When the players crave more than slaughter and treasure, it's time for GURPS Dungeon Fantasy 23: Twists. This supplement explores giving delvers lands and titles, presenting evil as going beyond dangerous to horrific, and challenging heroes with higher-tech risks and rewards. Yet it aims not to complicate the game in the process, suggesting streamlined treatments that deliver the essentials without all the rules.

Knights need castles, evil should be scary, and sufficiently advanced technology is indistinguishable from magic.