The command post was well guarded. It should have been. The hastily constructed, unlovely building was the nerve center for Paneuropean operations along a 700-kilometer section of front – a front pressing steadily toward the largest Combine manufacturing center on the continent.

Therefore, General DePaul had taken no chances. His command was located in the most defensible terrain available – a battered chunk of gravel bounded on three sides by marsh and on the fourth by a river. The river was deep and wide; the swamp, gluey and impassable. Nothing bigger than a rat could avoid detection by the icons scattered for sixty kilometers in every direction over land, swamp and river surface. Even the air was finally secure; the enemy had expended at least fifty heavy missiles yesterday, leaving glowing holes over half the island, but none near the CP. The Paneuropean laser batteries had seen to that. Now that the jamscreen was up, nothing would get even that close. And scattered through the twilight were the bulky shapes of tanks and ground effect vehicles – the elite 2033rd Armored, almost relaxed as they guarded a spot nothing could attack.

Inside the post, too, the mood was relaxed – except at one monitor station, where a young lieutenant watched a computer map of the island. A light was blinking on the river. Orange: something was moving, out there where nothing should move. No heat. A stab at the keyboard called up a representation of the guardian units... not that any should be out there, thirty kilometers away. None were. Whatever was out there was a stranger – and it was actually in the river. A swimming animal? A man? Ridiculous.

The lieutenant spun a cursor, moving a dot of white light across the map and halting it on the orange spot with practiced ease. He hit another key, and an image appeared on the big screen... pitted ground, riverbank... and something else, something rising from the river like the conning tower of an old submarine, but he knew what it really was, he just couldn't place it...

And then it moved. Not straight toward the camera icon, but almost. The lieutenant saw the "conning tower" cut a wake through the rushing water, bounce once, and begin to rise. A second before the whole shape was visible, he recognized it – but for that second he was frozen. And so thirty men with their minds on other things were suddenly brought to heart-pounding alert, as the lieutenant's strangled gasp and the huge image on his screen gave the same warning...

Less than three minutes had passed. After the initial seconds of panic, the command post had settled down to business. Instead of masterminding an attack, it was fighting for its own life. Men spat orders into throat mikes, eyes on the big screen. The orange dot that was the Ogre was six kilometers closer, but green sparks were moving out to meet it – the men and machines of the 2033rd.

The general entered at a run. "Get me a picture!" he ordered. The screen flickered; moving dots gave way to an image. The huge machine ground over the landscape, incredibly fast for something so huge. Guns bristled. The tower on top rose fifteen meters high.

"A Mark V," said the general. "They really want us, all right. Who had the watch?"

"Sir, the river. I got a movement indication from the center of the river – I saw it come up. Nothing before that. I swear it, sir."

The general started to reply, then checked himself. He stepped to the keyboard. The map reappeared (the orange dot was closer) and shrank. They saw their island from fifty – a hundred – kilometers in the air.

The general traced the river-course. "Here... and here. Yes, they could have done it."

"Underwater. It went into the ocean here. Through the delta – up the river and out. Very clever. I wonder... No, they just outfoxed us. As you were, son." 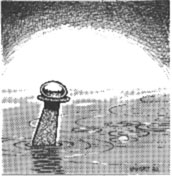 The Ogre was twenty kilometers away. On the big map, a ring of green around it showed missile tanks ready to move in; more green dots, visibly moving, were GEVs harassing the enemy machine. As they watched, one GEV light went out. Another stopped moving and began to blink plaintively. The Ogre moved toward it.

Twelve minutes since the shooting had started. The Ogre was fifteen kilometers away. Faced by eight missile tanks, it had slipped to the side; three of the tanks were gone, and two others had never gotten in range. But the Ogre had paid; it was moving slower now. On the big map, three more green dots moved toward it. The heavies were going in.

"Mercier to CP. We've spotted it."

The general punched for an image. There it was. Four of the six missile tubes were empty; two of the "small" guns along one side were scrap. Loose tread flapped; damaged motors sparked. Its guns moved and flashed. Then the screen dimmed as a nuclear warhead hit the Ogre. The image returned. There was a new crater along one of the armored sides – nothing more.

"Get those guns, Commander." The general's voice was calm; Mercier's reply was equally mild. "Trying, sir. It ducks." Then jubilation. "Good shot, Fair. You got it. Hit the misbegotten pile of junk." The big screen went completely dark. It came on again, from a different angle. The Ogre was hurt. One of those big front guns was gone – completely. The other was clearly wrecked.

"This is Kowalski in 319. It got Fair about three times. I can't find Mercier."

On the screen, one heavy tank faced the Ogre. Two GEVs swept in and out. Missile tanks and infantry moved closer – too slowly.

"Here it comes." Kowalski – commander of the last heavy. "You'll have to shoot better than that, you gadget. Gotcha! Took out its..."

Static. Then a new voice. It sounded quite human. And amused.

The Ogre rolled on. It was within howitzer range now, and the big missile cannon were scoring on it. Its missiles were gone, but it still had guns. The infantry had met it – finally – but powered armor notwithstanding, they were dying as fast as they came in.

"It's committed," said a big major, his eyes on the screen. "It can't afford to stop now." The general nodded. "Get behind it," he said into his mike. "It's after the howitzers. They're killing it."

In the flame-lit darkness, men heard the scrambled transmission. Men, and one other. The Ogre took in the surrounding terrain, considered the location of the command post and the howitzers, watched the movement of its enemies, weighed the order it had decoded. Behind, it thought. They have made a mistake.

It was very close now. Had the command post had windows, the men inside could have seen the explosions. The Ogre was moving very slowly now, but two guns still spoke. It no longer dodged; it was a juggernaut, coming straight for its target.

Inside, the general's face was gray. He spoke to no one in particular. "Smart. That thing is smart." A scream still echoed in the big room – the scream from the last missile tank commander. Out of the Ogre's path, safe behind a three-meter ravine, lashing out at the metal giant – and the thing had changed course, ignoring the howitzers, walking over the gully like it wasn't there, crushing the smaller tank. Two GEVs had died a second later; their speed was their best defense, and the Ogre had outguessed them. The side trip had given the howitzers a few more minutes; then they, too, had died.

The screen showed the Ogre grinding on – a shambling monster, barely able to move. "The treads... hit the treads," whispered the general. "Stop that thing." The image changed, and he saw what was left of his force: three GEVs and a handful of infantry.

The Ogre rolled on...