"Got to catch my breath," Dan Summers panted. The young Ranger halted, leaning against the alley wall, hand clutching his M-7 electromag grenade launcher. The double suns of Monolith cast crazy shadows in the salmon-colored light. His platoon had been dropped here to help the locals to resist the Ilshani invasion -- but someone underestimated enemy strength, and it had all gone to hell. Now they were only two Rangers left, and the Ilshani cybermechs were closing in.

Dan glanced at his partner. She was standing quietly behind him, waiting for orders. Though they'd been running for hours, she was calm and relaxed, not a drop of sweat on her body. Which was not surprising. Although she looked like a teenage girl, Synthia was actually a Hunter Industries "Nemesis" covert operations android, a sophisticated robot with a neural-net brain. But if the frailty of Dan's flesh bothered her, she gave no sign. 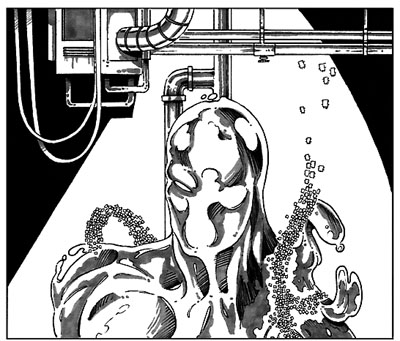 "Did we lose them?" Dan asked her.

Synthia shrugged; it was a human gesture she had recently noticed and had taken to practicing. Uncertain if it conveyed her meaning, she added verbal input. "Dan, the Ilshani machines hunting us are heavily shielded." She paused for a second, doing a 360-degree scan. "Wait. My sensors are picking up -- !" Synthia shoved Dan to safety just as the alien juggernaut crashed through the alley wall. But she was too late to save herself. The three-meter torus of nuclear-powered steel ran over Synthia, crushing her with a sound like a man stepping on a beer can.

Dan rolled to his feet and clawed for his grenade launcher, heart racing. He knew he faced an Ilshani Cyberwheel, a high-speed pursuit robot shaped like a giant wheel, its gun turrets mounted on either side. As the Cyberwheel loomed before him, weapons swivelling to lock onto him, Dan fired from the hip. Direct hit! The shaped-charge grenade smashed into the machine and detonated. The impact blew a smoking crater in the Cyberwheel, blasting it back. It lay motionless, smoke pouring from the wreck.

"Good riddance," Dan said. He let out a breath, stepped over the wreckage and walked forward, surveying what was left of Synthia. A human would have been dead. As it was, Synthia was trying to stand. But both her legs were wrecked, one snapped off, the other a mass of flattened metal and trailing optical cables. Beneath her was a spreading brown pool of lubricant fluid.

"I am afraid I have suffered extensive damage, Dan," she replied calmly. With one hand, she separated a useless leg from her body. "My main power plant is disabled. I am operating on batteries. Both legs are nonfunctional. Testing sensors now. All nominal except thermograph shows that -- danger! The wheel!"

Dan whirled. The wrecked wheel had split open. From inside the core of the burnt-out metal shell crawled a streamlined snake-like machine. The wheel's brain -- trying to escape, or attack!

"The worm in the apple!" Dan thought. He aimed and pulled the trigger. Nothing. Damn! His launcher was empty! The metallic flexibody reared up, over Dan, its head poised to strike, cyclops eye glowing with a feral light.

And then Synthia raised herself up on one hand. A needle beam of coherent light arced from her right palm, piercing the creature's head. The core robot's metal skin melted like a candle wax, then exploded as the computer brain was super-heated into steam.

Dan let out a breath. He looked at his partner.

Synthia had been practicing those, too.

GURPS Robots is a complete sourcebook for building and using robots as equipment or characters. Synthia appears in GURPS Robots, along with dozens of other sample robots. Others can be built using the detailed robot construction rules included within the book, which use a streamlined version of the complex GURPS Vehicles system (in fact, we like the new system so much that it will appear in new editions of Vehicles.). There are scads of options for different types of computer brains, robotic arms, nanotechnology and exotic gadgets -- but a few things were left out for reasons of space. Here are a few more options that will let you build strange robot designs like the Cyberwheel . . .

A smaller "core" robot can be built within a larger robot "shell." Usually it is the corebot that contains the robot's vital brain and power system, enabling it to escape or fight on after the outer shellbot has been damaged or destroyed. Build the corebot first, just like a normal robot. Then build the larger shellbot. It is built like a normal robot with three exceptions:

Normally, damage to the combined robot affects only the shellbot, not the core. But if an explosion or fire does damage that penetrates the DR of the shell's body or head housing the core, one-quarter of that penetrating damage is also inflicted on the core robot. The core's DR protects against this damage. The corebot can separate from the shellbot (or its wreck) at any time. This takes two seconds and splits the robot into independent shellbot and corebot. If the corebot has full access, a hatch slides open, magnetic bolts are released, and out pops the core robot. If the corebot is buried, explosive bolts and panels blow open, ejecting the corebot but doing 6d damage to the shellbot per cf of corebot volume (ignoring shellbot DR).

Once independent, the corebot's statistics are those of the original core robot design. If the shellbot has its own brain and power system it can function without its core provided it wasn't destroyed: recalculate its ST and Speed performance statistics, since it no longer has the weight of the core robot, but remember it can no longer use the core's brain or power system. (However, a shellbot with a brain could be remotely controlled by the corebot after separation, using normal rules for drone robots.)

If a corebot was designed with full access, the core and shell may rejoin together into a combined robot (provided the shell wasn't destroyed). This takes two seconds. Putting a buried corebot back into a shellbot requires major repairs. A shell/core system may be used with a battlesuit or cyborgs as the "corebot." An example of a robot shell with a battlesuit core is the "motoslave" in the Japanese cartoon Bubblegum Crisis.

A wheelform-propulsion robot is shaped like a giant wheel. It is powered by a motor in its axis and moves by rolling. Wheelform propulsion robots tend to be well-armored, menacing machines built to terrorize human opponents. Besides the Ilshani "Cyberwheel" that crushed Synthia, famous examples include "War Wheel" in DC's Blackhawk comic or the "Jagernauts" in John Shirley's novel Eclipse.

A wheelform robot requires a "wheelform drivetrain" (with the same TL, weight, volume and cost as a flexibody drivetrain) housed in the robot's body. A wheelform robot cannot have any other drivetrain system nor can it have a GEV skirt, wings or rotors. Heads must be mounted on a side, not the top or bottom.

A wheelform robot moves on the ground -- the top speed is calculated as if it were a wheeled robot, but it crosses rough terrain as if it had tracks. If it crashes head-on into anything it does +1 per die crushing damage; it can also roll over anything smaller than it, doing thrusting/crushing damage based on its body ST, with an extra +1 per die. A wheelform propulsion system is disabled only if the robot's body is disabled.

This is a flesh sheath a robot can wear as a temporary disguise. When the robot wishes to reveal its true form, it literally "bursts" out of it, revealing its mechanical body underneath! Discarding flesh is identical to "realistic flesh" as described in GURPS Robots except it costs 20% more.

The advantage of a discarding flesh sheath is two-fold. First, if the robot looked like a human or animal, characters may have to make a Fright check when the ‘bot's skin unexpectedly bursts open to reveal the machine within. If the revealed robot is particularly awful looking, subtract the robot's Appearance reaction modifier from any Fright check! This makes Discarding Flesh robots very useful for horror adventures.

Second, the shedding of its skin makes the robot somewhat lighter, usually eliminating several pounds from weight. The GM should calculate two sets of performance characteristics for ST and Speed, one including the robot's flesh, one not including it. Shed flesh can be repaired for 20% of its original cost.

The Hellspider is a small multi-purpose combat robot that looks somewhat like a metal tarantula. Hellspiders are typically used for security patrols in small areas like air ducts, for vermin extermination, or for stealthy assassinations.

Legend: LR = Legality rating; cf = cubic feet; lbs. = pounds. KWS = kilowatt-second -- for example, a power cell that holds 2 KWS can supply 2 kilowatts for one second, or 1 kilowatt for 2 seconds, or half a kilowatt for 4 seconds, etc.

A robot with a computer brain has the advantages Absolute Timing, Doesn't Sleep, Eidetic Memory 2, Lightning Calculator, and Mathematical Ability, worth a total of 100 points.

Robots have a split HT, divided into actual Health and hit points, much as animals do. Health measures the robot's general reliability. Hit points, or hits, are used to determine how much damage the robot can withstand. A robot with a low Health but many hit points can take a lot of punishment -- but it also requires a lot of maintenance to keep running properly, just like a tank or a jet fighter.