This article originally appeared in Pyramid #16

Car Wars Card Game is a multi-player beer-and-pretzels game simulating the fast and furious atmosphere of an autoduel without counters, a map, or complex rules. The only catch is you're limited to a mere four weapons and straight car-vs.-car battles. Here are three ways to add variety to a Car Wars card game without adding extra cards.

As every Car Wars player knows, a bike is a cheap ticket to paradise - one way. The cyclist isn't protected by armor, the bike can't carry heavy weapons, and only skill and maneuverability can keep you from turning into street pizza. Still, a cycle does have some things going for it: it's small and agile, making it harder to hit, and because it's cheap, it's worth less to lose. A good, lucky cyclist can sometimes take on a car and win big - and a pack can make any driver wish he'd taken a bus. Before the game starts, any player may declare his car is actually a cycle. Here's what this means in terms of play: 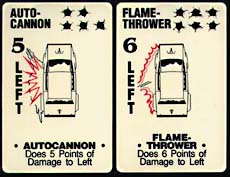 Flamethrower and Autocannon Cards: A cycle isn't large enough to mount a lot of heavy weapons - in fact, all it has are missile pods and machine guns. A cycle player holds Autocannon and Flamethrower cards in his or her hand and discards them normally, but can't play them as Attack cards.

Right and Left Armor: A bike's lack of armor protection for the cyclist is simulated by giving it no right or left armor. In effect, its right and left sides start off ŇbreachedÓ and any damage will go straight to the driver. Right or left Armor cards may not be played to reduce this damage - but see below.

Swerve Cards: Due to a cycle's small size and high maneuverability, right or left Armor cards can be played as Swerve cards by the cyclist! All normal rules for Swerve cards still apply.

Scoring: Any car that a cycle kills is worth 50% more points than normal (round up). A car that kills a cycle gets only half as many points. A cycle that is the last survivor gets 30 points.

Effect on Play: An all-cycles game is much bloodier - if you want a short, sharp match, give it a try. Cycle vs. car is something of a mismatch in one-on-one play, but in a multi-player game or a series of games, the scoring rules generally allow cyclist players to hold their own. For an exciting three-player game, two players with cycles can team up in a cooperative match against a single car player: the car player wins if he kills both cycles; if he is defeated, the cyclist player that put in the killing blow is the winner.

Car Wars without caltrops? Nah. Here's a pointed variant that'll put the fear of God into everyone's tires: At the start of the game, the players may vote on whether to use spikes. (A tie means they aren't used). If spikes are in use, all Rear Missile and Rear Flamethrower cards are now considered Spike cards - they can't be used as Rear Missiles or Flamethrowers.

Using Spikes: The new Spike (previously Rear Missile and Rear Flame-thrower) cards can't be used to Attack. Instead, a Spike card may be played defensively whenever the vehicle is attacked from the rear. The Spike card may be played on its own, or in conjunction with Armor or Swerve cards. When a Spike card is played, it does 4 points of damage to the attacking vehicle's tires. Spikes can be countered by Swerve cards, but Armor has no effect. The play of a Spike card does not provide any defensive benefits to the playing vehicle.

Effect on Play: Spikes don't really change the balance or strategy of the game much. They do make Swerve cards somewhat more valuable.

In the Car Wars board game it's possible to link several similar weapons together to make a devastating attack. This rules variant allows players to do the same with the right combination of cards! As with the spike variant, linked weapons should be voted on prior to starting a game. If it's a tie vote, this rule isn't used.

Linked Weapon Attack: A player can make a Linked Weapon attack if he or she possesses two Attack cards of the exact same type (for example, two Rear Missile cards, or two Front Machine Gun cards). The two cards can then be played simultaneously against the same target. Treat it as one attack of double normal damage. As it is a single attack, no more than two armor cards may be played against it, and a single Swerve will evade both cards.

Effect on Play: Linked Weapons will make games faster and bloodier. If you have to squeeze a Car Wars Card Game into a short time-slot, I recommend using this rules variant.