Art by Art Today and Colored by Phil Reed 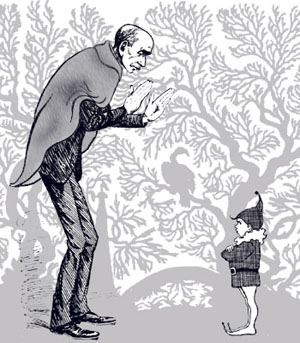 Quirks: Wanderlust, Dislikes children, Vegetarian, Relates everything to "Life's Journey," Will not enter any population center larger than a hamlet. [-5]

Gygan Wanderer spent his early years in a small village at the edge of civilization. His large size assured that he would stand out among the other children. Had his strength matched his frame, he would have been fine. Alas, his height was that of the scarecrow; impressive enough, but with no real strength backing it. The other children were quick to realize this.

Children can be cruel.

The only peace Gygan ever found was in the wilds around his birthplace. The birds didn't care that he bore more resemblance to a tree with a cloak than a person. The animals, if they bothered with him at all, treated him with cautious indifference. The trees . . .the trees just continued whispering their secrets to the winds. He began to spend more and more time in the wilds. The children that had tormented him became adults that didn't understand him, and he felt no need for their company. He never got lost. He could feel where the village of his birth lay. It simply wasn't home.

He was a young man when he first encountered the Rangers. He'd heard of them, of course. Few on the fringes of the Realm hadn't. It was their swords, their skills, and in some cases their magic, that kept the borders secure. There wasn't a hearth for miles around that didn't have stories of the Rangers told near it. They parleyed with Dragons, guarded travelers, and battled the monsters beyond the frontier. In a way, encountering them was a disappointment. The legends he'd heard so much about were only people, after all. But what people! They knew so much! They could name all the plants he knew of, and hundreds besides. They knew which healed, which helped fevers, which caused twisted dreams. They knew the animals, in many cases by name. Gygan was astonished at the depth and breadth of their wisdom. When one among them, a Mage who saw potential in the tall youth, asked him to join, he could not say "yes" quickly enough.

Never a warrior, and lacking Dragons to parley with, Gygan found himself drawn to the third function of the Rangers. He became a guide, and with his natural gifts, a very talented one. His pay also draws customers to him. He asks for no gold or silver. What use are they in the wilds? Clients merely buy what few supplies he needs for him, and while on the journey itself, teach him something. Anything. Songs from their childhood, skills they picked up, a new move with his staff, languages, spells. It matters little to this gentle giant. All knowledge is but a step on his journey.

Quotes:
"All journeys begin with a single step. Take this one with me, and I will see you safely to your destination."

"Town? Perhaps it would be best if I stayed here."