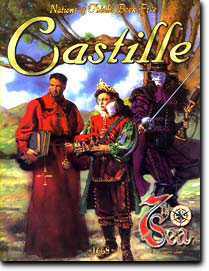 So far, the goal of the 7th Sea "Nations of Théah" has apparently been to present not only a nation, but a theme in each case. If that is true, then Castille has succeeded in grand style. Although the setting clearly owes much to the legendary masked men born in this period (Zorro in particular), the theme is one not of secrets, but of a very distinct dichotomy, one the book uses to considerable effect.

As with every other place and group in the world of 7th Sea, in Castille heroes are Heroes and villains are Villains and never the twain shall meet. But sometimes, it seems that Castille is everyone's enemy, whether hero or villain. Abroad, the Sea Dogs (Avalon's not-so-secret privateers) hound Castillian merchant ships, and the navy is too busy holding off the Montaigne fleet to do much about it. Montaigne soldiers hold a third of the country. Both the Eisen and the Vodacce (Castille's other neighbors) look at Castille with hungry eyes borne of old wounds, and the Vendel League (Théah's richest organization) professes neutrality while getting chummier with Montaigne every day. Meanwhile, within Castille's borders, the power of the Inquisition grows, quelling anything they deem "heretical" or "sinful." Though most Castillians disapprove of the Inquisition's excesses, given the Montaigne invasion they're becoming progressively more willing to accept . . .