"If we win, nobody will care. If we lose, there will BE nobody to care."
Winston Churchill before a secret session of the House of Commons, June 25, 1941

It is 2079, and the Final War has became a war of attrition ­­ a meat-grinder that military historians have likened to World War I on a global scale. Paneuropean forces in the Sahara Combat Zone face continuous probes from Combine conventional forces and Ogres based out of Morocco. With the Combine breakout from Spain and into the plains of France, Paneurope Defense Command has shifted their full attention to the European Theater.

Elements of the Second Army based in Egypt have been informed that they can expect little support from home for the foreseeable future. DefComm has decreed that the Second Army should conduct a campaign of harassment and delay against Combine forces in the SCZ until such time as reinforcements can be spared or transport arranged to withdraw the divisions of the Second Army to mainland Europe. It is up to the fast-moving units of the Second Army's Fast Attack Cavalry to seek out and destroy Combine supply depots, command posts, light armored columns, and other support facilities. It is hoped that these raids will distract and delay Combine forces long enough to allow the heavier elements of the army to make preparations to stand and fight in Libya and western Egypt.

The results of this campaign could determine the outcome of the War. If the Combine is allowed to gain control of North Africa along with their current positions in Europe, the Federation will face entrenched enemies on two of her three flanks. The forces of the Second Army must prevent this at all cost.

A Brief History of the 30-Seconders 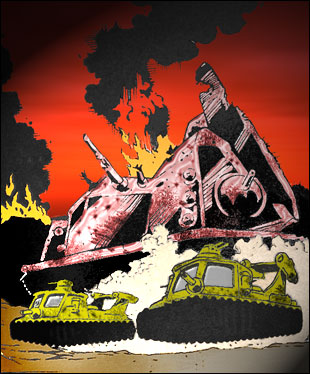 The Fast Attack Cavalry of the Second Army's North Africa Corps consists almost exclusively of GEV units. The rolling, sandy terrain of the Sahara Combat Zone is the most inviting and accessible terrain short of flat, calm lakes that GEV pilots could hope for. Given the large stretches of open countryside, the speed of the GEVs make them the best suited fighting vehicle for the region since Camels were tamed by Bedouin raiders.

Whereas GEV pilots in other theaters have to maneuver their craft among trees and buildings, FAC pilots routinely maintained 200+ kph speeds for hours at a time while on patrol without having to make more than minor course corrections. The wide open Sahara is a magnet for the speed-demons of the Federation military, and hotshot pilots from other units constantly seek transfer to North Africa. This makes the Second Army FAC one of the best (and most incorrigible) units in the Federation Army.

Before the invasion of Morocco and the Ivory Coast by Combine forces in 2074-2075, the FAC saw few pitched battles. Detractors of the highly individualistic and (to outside observers) pampered unit considered North Africa a cushy assignment for speed freaks and troublemakers. "Drag races" were common, and the officers of the FAC turned a blind eye to most of their men's excesses as they too had been known to "blow dust" on occasion.

As Combine forces began to move out of their beachheads in September 2074, the FAC units were the first to engage the enemy in large-scale fighting. The open terrain that promoted racing and fancy maneuvers also gave exceptional visibility, allowing the heavier Combine forces to score long-range kills against the lightly armored GEVs. The skills of the FAC pilots were put to the test as the speed and maneuverability of their craft were the only thing that prevented them from joining the thousands of others who lost their lives in North Africa, from Roman legionnaires to German tankers.

During the first six months of the ground war in Africa, FAC forces suffered devastating losses. In the battle of Ghadamis on the Algeria-Libyan border, the FAC units involved suffered losses of almost 60%. Fortunately, the heavy armor of the Second Army was successful in stalling the Combine offensive and the FAC units wee pulled back for refit and reorganization. The days of carefree racing were over.

As new equipment and personnel pour in to Egypt, the veterans of the running battles in Algeria have devised new tactics and training routines for the fresh arrivals. The enthusiasm of the pilots disembarking in Cairo is palpable. They are joining the famous Second Army FAC, the best of the best, and are eager to show they have the right stuff. As they settle in to their training rooms, their instructors face them with grim faces and welcome them to the 30-Seconders. Inevitably, one of the new arrivals asks what the term means:

"The average life expectancy of a GEV pilot engaged in combat in the Sahara Combat Zone is 30 seconds. Now, if you turn to page 4 of your briefing manual . . ."

GURPS Ogre presents the GMs and players with a high-powered setting for roleplaying, and also presents a new set of challenges to the GM. In a world where nuclear weapons are a way of life, typical adventuring styles meet with little success. Ogre is a militaristic world that calls for aggressive, combat-oriented play. The Second Army FAC "30-Seconders" provides the GM and players with a small, cohesive unit that operates independently from the normal channels of military command. This gives them the flexibility needed for individual roleplaying while providing a solid foundation for the GM to build on.

The players should create characters around the GEV-Jockey Template found on pg. 40 of GURPS: Ogre. Additionally, they should take the Non-Com or Officer Lenses detailed on pg. 47. This will yield a "new arrival" character for the FAC of between 80-100 points. If the players wish to be veterans of the Sahara Combat Zone, the GM should allow an additional 25-50 points to create more experienced pilots and gunners for the FAC GEVs.

The 30-Seconders use the Paneuropean "Galahad" GEV detailed on pgs. 69-70 of GURPS Ogre, while the more insane members of the unit fly the one-man "Cossack" Light GEV found on pgs. 70-71. Since the heavier Galahad is a two-man craft (driver/gunner) the PCs can either team up with other PCs, or take one position and leave the other to be filled by an NPC.

FAC units range in size from two-vehicle elements up to 20 or more craft operating together. To date, the hit and run raids punctuated by carefully chosen larger engagements have proven effective at limiting the advance of Combine forces in the SCZ. In addition to these harassing raids, the 30-Seconders scout for the heavier elements of the Second Army, coordinate attacks on fortified enemy positions and force concentrations, transport special forces teams deep behind enemy lines, and other missions that call for speed and stealth.

Originally part of the 43rd GEV FAC based out of Al-Quatrun in southern Libya, Captain Loraine Mahewy's "Master Ninjas" were established as an independent unit after the 43rd suffered heavy losses to Combine forces in the natural gas fields near Edjeleh, Algeria in late 2074. The Ninjas currently consist of five Galahad GEVs crewed mostly by veterans of the last two years of fighting. The fact that they have survived as long as they have as a cohesive unit is a minor miracle and indicates that they are among the elite, capable of defeating almost any unit from any army in the world.

Since early 2075 the Ninjas have conducted numerous hit and run raids across the Algerian border from their nominal base in Libya, including the spectacularly successful strike against the Combine Forward Rearmament Facility at Mizi, just north of the Tasili mountains. As a result of the raid at Mizi, the Ninjas have earned a price on their head from Combine African Command. The Ninjas take this as a point of pride and are more than happy to remind their fellow FAC units of the fact.

The Ninja's GEVs are in remarkably good shape considering the amount of action they have seen, but obtaining ammunition and replacement parts is becoming more difficult as supplies are diverted to the battlefields of Europe. Captain Mahewy maintains good relations with the commander of the 14th Supply Detachment at Benghazi on the Libyan coast, but the distance to the forward supply depot still poses problems. Unless a more readily accessible supply of parts and ammunition can be located, the Ninja's operational readiness will be severely limited.

The Ninja's GEVs are painted in intricate desert camouflage patterns, and each includes the unit's insignia on the right side beneath the pilot's cockpit: a hamster dressed in ninja garb and wielding nunchaku. Members of the unit wear black bandannas in addition to their standard desert BDU uniforms and carry throwing stars, although few know how to use them to any great effect.

The PCs are assigned to escorting a Napoleon GEV Personnel Carrier and its passengers to a location 30 miles into Combine-controlled territory. Once there, they are to stand guard over the Napoleon as the infantry (nine men in oddly colored heavy battlesuits) conduct their operation. Unknown to the PCs, the battlesuited men are special forces personnel attempting to extract a double agent from a nearby Combine intelligence-gathering outpost. Once the troopers grab the agent it is almost certain that Combine units will scramble to intercept the FAC units.

The PCs FAC is assigned to patrol deep into enemy territory seeking lightly defended supply or command and control targets. Intelligence reports indicate that one of the Combine forward command posts in the PCs area of operation may be receiving a visit from a high-ranking Combine officer. Although such a visit would include a heavy escort, a target like this doesn't come along every day.

Combine forces are conducting a reconnaissance in force in the PCs area of operations. Several heavy tanks, GEVs and other assorted unites are moving into an area of dry streambeds and dunes that will make their passage difficult at best. The PCs are to conduct harassment raids against the heavy tanks while attempting to avoid the GEVs. The Combine is hurting for reinforcements just as badly as the Federation, and any losses that can be inflicted will help the overall situation in the SCZ.

The PCs are the recipients of an almost unbelievable stroke of luck ­­ a nearby reconnaissance drone unit reports a lightly defended Combine supply column has been stopped at a recently washed out bridge over a steep canyon approximately 75 km north of the PCs position. A lightning raid should catch the vehicles disorganized and in the process of reversing direction ­­ a perfect opportunity to possibly capture some much needed ammunition and other supplies as well as striking a blow against the Combine forces in this area.

While on a patrol across enemy lines, the PCs are directed to a nearby village where drones report the presence of a Mk I Ogre. According to the imagery received by the Drone, the Ogre is sitting in the middle of the small village and appears to have children playing on it. It seems to be intact and undamaged, and fired on the drones as they approached for a closer look. This highly unusual situation must be investigated as an Ogre in this area (even a Mk I) could prove to be very dangerous to Federation plans. The PCs are advised to try to limit civilian casualties if at all possible.