by Onno Meyer and Hans-Christian Vortisch

Art by ArtToday and Dan Smith and Colored by Keith Johnson 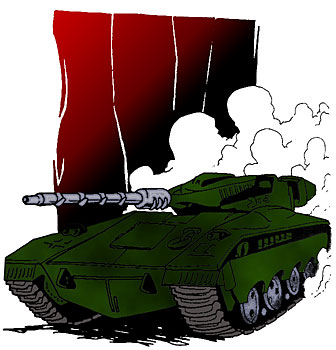 Arizona Smith was hacking his way through the jungle towards the hidden temple. No way Doktor Müller would get there first in his truck. Suddenly he heard a strange noise. A bulldozer? Here? Then he saw the tank breaking through the saplings . . .

Sgt. Young sneaked through the night. In a few hours thousands of paratroopers would jump out of their planes all over Normandy, and before that happened his resistance team had a mission to do. But something looked wrong as he approached the bridge. Could that be tanks? . . .

The way in would be simple, Agent 700 thought. Just glide down the telephone line. But that was no way out. Steal a truck and crash through the gate? No very good plan, with machineguns in the guard towers. Of course they could try to get one of the tanks. "Tanya, have you ever driven a T-55?" . . .

Ramirez peered through his binoculars. The Greys had selected a good position for their camp. Did the aliens expect an attack? Whatever the reason, they'd need something heavier than their Hammer railguns. Perhaps the Spook on the squad could "borrow" a MBT from the locals. Their SecOp would have screaming fits, of course, but something had to be done before they dug in even more . . .

Heavy armor can be useful in many "action" adventures, not just in vehicle centric wargame campaigns. Here is a selection of historical vehicles that covers most of the 20th . . .