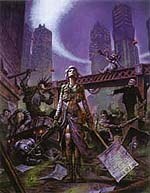 Year of the Comet (for Shadowrun)

In both of their flagship games, Shadowrun and Battletech, FASA was known for implementing and steering through big changes for these settings. Primary among these were the return of the Clans in Battletech and the election of the dragon Dunkelzhan as UCAS President in Shadowrun. Now changes are being wrought to the Sixth World once again, but it isn't FASA behind the wheel. FASA's decision to close their doors earlier this year came as a sad shock to many, but it did allow for the survival of their intellectual properties, unlike so many good games we have lost. Thus WizKids own the rights to Shadowrun, but they have licensed it to Fantasy Productions to develop the game and setting.

The first release from FanPro is Year of the Comet, which details an auspicious year for the Sixth World. 2061 marks both the return of Halley's Comet to the night skies -- itself a herald of change, and the fiftieth anniversary of the Awakening, the event that brought dwarfs and elves back into the world. The book examines and details numerous changes -- arcane, mundane and political, . . .