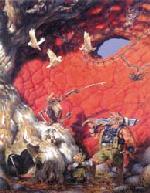 Picture this terrifying, yet real-life, scenario. FanPro tells you "we're gonna release a sourcebook for Shadowrun with all these cool magically active places!" And you go "woot!" Why, I don't know. It's a strange sound, to be honest, but there you go. "Woot!"

So, you stroll down to your Friendly Local Game Store and pick up Target: Awakened Lands.

You go home, uncork some Dew De Montagne '01, and begin to peruse.

But wait! This isn't a sourcebook on magically awaked places! Okay, it kind of is, but Not All of It! No, this is a sourcebook on that most strange and exotic of locations: Australia!

Okay, so it isn't bad that they've finally done a sourcebook for Australia in Shadowrun. It's a nice place (when it isn't on fire, mind you). They've contributed so much to international culture (Midnight Oil, Nicole Kidman, Russell Crowe, and at least three Crocodile Dundee films) and they have a great wilderness that's almost as lethal as Canada's ("almost" by dint of it's mostly warmer).

And they have gotten a lot of short-sticking by many game companies. Since I'm not from there, I can't say there's anything wrong with an Australia sourcebook. But I would hare preferred they say that on the cover. (Okay, so they have an illustration of an Aboriginal and a Koala . . .