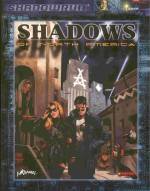 Shadows of North America (for Shadowrun)

Coverage of the various locales in North America in the Shadowrun universe tended to be spotty at best; while Seattle, Denver, and Tir Taingire got whole books of their own, the Native American Nations only had two fairly mediocre volumes where commentators tended to complain about the weather more than covering topics of interest to the average shadowrunner. And while the UCAS were frequently mentioned, any discussion of them was usually limited to specific cities rather than the nation as a whole.

Fortunately, this state of affair is now officially over with the publication of Shadows of North America, the biggest post-FASA sourcebook for Shadowrun so far. This book provides a full coverage of the 13 North American nations between Aztlan (the nation that used to be Mexico and several other Mesoamerican nations) in the south, and the Trans-Polar Aleut Nation in the frozen north. And this time, the coverage is truly useful to shadowrunners (and more . . .