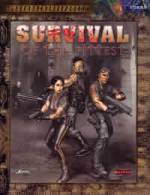 Survival of the Fittest (for Shadowrun RPG)

In Shadowrun, the best advice you can have is to "Remember to watch your back, conserve ammo, and never, ever, cut a deal with a dragon." But players being players (or rather, players being shadow runners), sooner or later as their careers progress and their professional reputations grow, they are going to come to the attention of the dragons . . . or at least to those dragons who take an interest in the affairs and doings of the younger races: Elves, Dwarves, Humans, Orcs, Trolls, and so on. So what happens if the players have to deal with some of the Sixth World's most powerful and knowledgeable beings? This is a question answered in Survival of the Fittest, the latest campaign book for Shadowrun. Not only does it involve the characters in the affairs of dragons, it also continues the story and plotlines begun with the last Will and Testament of Dunkelzahn, the dragon elected to the presidency of UCAS in 2057 who was then assassinated shortly thereafter . . .

That Survival of the Fittest involves dragons and Dunkelzahn's will means two things. First, this is not a campaign for the inexperienced Shadowrun GM or player. This is not to say that they will not enjoy playing this campaign, but . . .

Copyright © 2003 by Steve Jackson Games. All rights reserved. Pyramid subscribers are permitted to read this article online, or download it and print out a single hardcopy for personal use. Copying this text to any other online system or BBS, or making more than one hardcopy, is strictly prohibited. So please don't. And if you encounter copies of this article elsewhere on the web, please report it to webmaster@sjgames.com.