I have often been accused of having undead on my fevered mind. This isn't entirely accurate, but like all rumors, there is a grain of truth to it. Animated corpses and spooky spirits fascinate me -- not because I'm a fringe spiritualist who thinks the undead are a "window on the soul," nor because I'm a Jolt-drinking freak [1] in a black tee-shirt [2] who thinks "dead guys kick butt," but because I find it incredible that almost every culture on the planet has a fascination with dead things. Color me an amateur anthropologist, I guess.

The trickiest thing about writing Undead was the research. I wrote it as a staff writer, on a strict internal deadline, which gave me about two weeks to make my notes. I simply did not have the time to read forbidden texts found moldering in Balkan tombs, interview old sea captains about ghost ships, etc. Instead, I played the secondary-source game: I read works on eschatology, magic, psychic phenomena, etc., and pieced together a picture, discarding any contradictions that couldn't be explained away. I also watched two scary movies a night for two weeks and had vivid nightmares the whole time I was writing the book (so there is a "fevered" angle to it).

The other challenge was to avoid coming across as an affected twit. Let's face it: Undead is a game book. People are going to be using it to stock their fantasy dungeons, or to create Bad Things for their Horror campaign, or to give their black ops something to blast. The last thing I wanted to do was write a dry academic piece that droned on about angst and damnation! To this end, I settled on a mix of one part factual background to one part practical campaign advice to two parts mechanics and statistics. That seemed to balance rules against everything else (in fine GURPS tradition) without losing sight of more subtle issues, like why zombies eat brains.

I originally planned to present a sample character for each of the twelve undead archetypes in the book. There was a crunch for space, though, and since most gamers know how to create characters, we decided to chop some of the sample undead instead of hacking on the rules. Below are five of these: Baseka is a mummy thug, Tom Snee is an undead Jack-the-Ripper type, the skeleton guards are standard fantasy cannon fodder, Gwynnyth is an attempt to illustrate that vampires don't have to be angst-ridden, and the toxic soldier is that green-haired guy from DOOM. 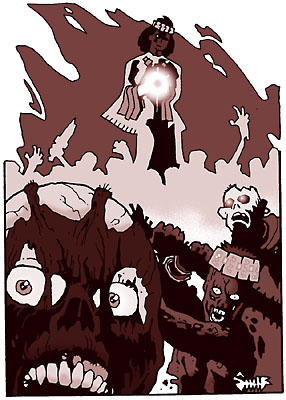 Description: Baseka is a mummy created by a forgotten ancient culture. He dwells in an underground tomb complex with several other undead (mostly mummies and ghosts), and spends a lot of his time patrolling its corridors, looking for grave robbers to smash with his club. He feels that the living are lesser beings, fit only to be crushed; undead characters will get a better reception if they can figure out a way to communicate with him.

Baseka is brutal but not stupid. He was a trained warrior in life and employs intelligent tactics. He knows that any damage he sustains in battle may be permanent, so he avoids direct confrontations. While one of the ghosts in the catacombs is a wizard who knows some Healing spells, ghosts have a tendency to fade away. Baseka usually picks off stragglers with surprise attacks, but will coordinate his undead cronies in an ambush if faced with a large party of grave robbers.

Since there isn't a great deal to do in a tomb, Baseka has taken to collecting the belongings of tomb violators and examining them carefully. To date, he has found several bigger and better clubs, the odd healing elixir and several books that he can't read. He has also acquired a lot of jewelry this way, and wears it to disguise his amulet.

In a GURPS Fantasy campaign, Baseka would be a good inhabitant for a mysterious crypt that predates the Banestorm (and human presence on Yrth) by millennia. With minor changes (add Illiteracy and Primitive, change language to Egyptian), Baseka could also be used in a Horror game.

Description: Tom Snee was a cheap hoodlum in life. He made his living as a footpad and was part of a loose-knit gang that worked London's East End. A violent man, he frequently killed his victims. This led to his being shunned by his fellow criminals, most of whom had no desire to get involved in murder. Aggravated by this ostracism, Tom turned his knife on his mates, who in turn sold him out to the CID to protect their hides. Tom was killed when he charged an armed officer and was shot like a dog.

Three months later, Tom got up and brushed off the dirt. He stole a razor-sharp knife from a butcher and resumed his killing spree. This time, his focus was specifically on those who betrayed him.

Tom has been wandering the East End for a year, now, killing his betrayers one at a time - along with anyone else who happens to get in the way. Fortunately for London, Tom will probably go back to the grave and on to Hell once he has slaughtered the last of his former colleagues. Unfortunately for the CID, they have been ordered to investigate the new rash of mysterious murders in the East End . . .

Tom is intended for use as a NPC foe in a Victorian GURPS Horror campaign. A few modifications would allow him to be used as the revenant of a cheap crook in almost any setting. 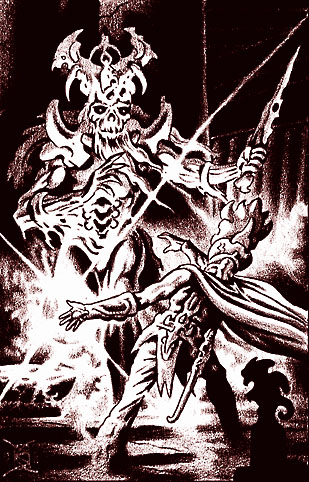 The following are skeletal warriors that may be encountered as the guards of a necromancer. All have these basic statistics:

Plus one of these equipment and skill packages:

Description: Two years ago, a shadowy man called "Michael" held a gladiatorial competition on the Tredroy docks. The top three warriors were to be chosen for his private guard, while the rest would be paid a month's wages and dismissed. Gwynnyth was chosen to compete, accepted gleefully and placed second overall. Along with the two other champions, she was escorted to Michael's estate in the countryside and told that Michael would join them in the morning. In the meantime, they were given plenty to eat and drink.

When they awoke, it was still night and Gwynnyth had more than a hangover; in fact, she was no longer quite herself. Michael appeared shortly - along with the zombified competitors from the docks - and revealed that he was a vampire. He quietly informed the three mercenaries that they were to be his undead lieutenants. Although some part of her wanted to protest, Gwynnyth found it all too easy to accept her new role. She has been serving Michael ever since.

Gwynnyth is a GURPS Fantasy character. She was worth 100 points before becoming a vampire, and costs Michael 45 points to dominate. She is typical of what a new PC vampire might look like, and would be an acceptable character in an all-undead campaign.

A sergeant who has been transformed into a ghoul by a nerve-gas test gone wrong. The Army didn't round him up and he wandered off the base. He's presently unequipped, but if he finds weapons lying around, he will use them!

No armor; no encumbrance.

A typical undead "spear carrier" that might be found guarding the gates of an evil wizard's stronghold.