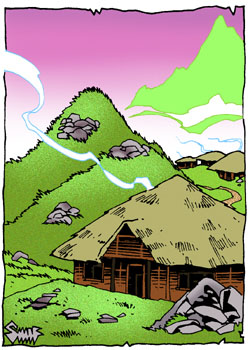 On Yrth (see GURPS Fantasy), in the foothills east of Quartedec, near the Emperor's Wall, lies a curious abbey. From the outside, it appears mostly unremarkable. It has all the buildings normal for monastic operations, chapels, libraries, stables, storehouses, etc.) The Thomasite order runs the establishment.

However, there are some important differences. First, like many Celtic-style monasteries, there are a number of beehive-like, monastic cells, where individual monks sleep. Unlike those monasteries, however, these cells are arranged in a mostly circular pattern about a quarter-mile distant from the main abbey proper. The placement of the monastery is also questionable. It lies at the base of a hill, on land with poor drainage. Within eyesight are a half dozen better sites to build the abbey.

The second anomaly is magical. Mages passing the outer ring of cells have a chance to detect the change in mana (Magery 1, 8 or less, Magery 2, 11 or less; Magery 3 13 or less). Spell casting will also reveal the truth. A successful detection roll will reveal this is a no-mana area. Please remember that any magic items brought into this area are now normal (including armor and weapons) and that powerstones will not recharge (an interesting optional rule is to have the powerstones drain upon entering the area). As all of the monks of the Order of St. Thomas are mages, this makes the location of the abbey that much more unusual. Within . . .