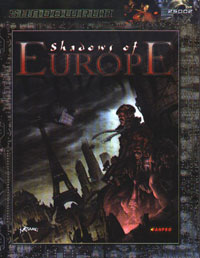 Shadows of Europe (for Shadowrun)

It is fair to say that the Shadowrun RPG gives much of its attention to the various nations of North America. Europe has received relatively little coverage; just three countries have been detailed in English, with the London Sourcebook covering the United Kingdom of the Sixth World, the Germany Sourcebook covering that country, and Tír na nÓg exploring the now-Elven-dominated united Ireland. German fans were also able to read a further sourcebook, Deutschland in Den Schatten Zwei, plus the campaign, Shockwellen. Both of these were official supplements, while Walzer, Punks and Schwarzes, and the French language Shadowrun France and Chrom & Dioxin, were all regarded as being semi-official. Despite the semi-official status of the last three, they -- together with the other supplements listed above -- all serve as the basis for the latest Shadowrun supplement, . . .

Copyright © 2004 by Steve Jackson Games. All rights reserved. Pyramid subscribers are permitted to read this article online, or download it and print out a single hardcopy for personal use. Copying this text to any other online system or BBS, or making more than one hardcopy, is strictly prohibited. So please don't. And if you encounter copies of this article elsewhere on the web, please report it to webmaster@sjgames.com.