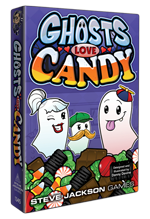 The idea for Ghosts Love Candy began on Twitter. I tweeted a concept: A game about ghosts possessing people at a fancy dinner party (along the line of the famous dinner scene in the movie Beetlejuice). But I didn't really have a solid foundation for it. Through conversations with people, the idea came up as a joke that the ghosts could possess children on Halloween, so they could eat candy vicariously through their hosts. The concept was bizarre and made little to no sense, and it sounded challenging to twist such a terrifying idea into a family-friendly box. . . IT WAS PERFECT!

So while the theme, oddly, came first on this game, having it up front made the mechanics fall into place that much quicker. I played a lot of Smash Up by Paul Peterson at that time, and I really loved how the cards interacted with each other. I knew I wanted a similar feeling in my game, which is where the deck of trick-or-treaters came in. I loved the idea of cute kids dressed in homemade costumes, which would grant abilities to their possessors: a hobo that travels from player to player, a zombie that won't stay down, or a cheerleader that keeps all her friends from giving up. These cards and their abilities not only added a strong dose of thematic flair, but they also created the opportunity for players to discover fun combinations and clever play.

The ghosts in the game are fairly straightforward. Players were already required to learn and think about six unique powers from the active kids in the neighborhood. I didn't want the ghosts to add any more confusion. Turn order was also a concern: If players took turns one at a time, it would feel unfair and scripted. I decided that players should "blind bid" for turn order by choosing a card from their hand. This allowed players to try to bid high to go first, or bid low to go last. Also since players all have an identical hand of cards, they slowly learn what ghosts are left in their opponent's hand. This simple mechanic worked out great and had very little change from its first iteration.

What good are ghosts and costumes without CANDY? The game obviously needed candy if it was going to be set on Halloween.

While the power of simple math helped me decide how many types of candy and how much of each there should be, the set-collection mechanic really became interesting once I locked in the craving cards. The craving cards represent your ghosts' specific rankings for the six candy types, from favorite to least favorite. Every candy appears once in every position among the six cards. Balancing these cards took some time, because we wanted to make any combination have interesting points of contention for every player count. The craving cards are certainly not the most exciting thing to look at in the game, but the way they work against one another and provide an interesting twist on set collection is one of my favorite things about the game's design.

As soon as the theme fell into place, I was instantly excited about creating the art. I went through several styles before finally landing on what I call "cereal box style." The art of cereal boxes for kid's cereal always seem to feature big-eyed, shiny characters with impossibly huge smiles. The angel was the first character I drew for the game, because I knew she was going to be happy and innocent-looking. If I could get her right, I knew the rest would follow. It was also important to me that the costumes look homemade, because I wanted things to be made out of cardboard with tape and zippers showing.

Once I had my style down, I needed to diversify my characters. In the real world, any kid can be anything on Halloween. I knew I needed a solid mix of boys and girls, and an even representation of different skin tones to accurately portray an average neighborhood. As weird as it may sound, I made a spreadsheet listing the costumes, and randomized it with five skin tones and random genders. I made adjustments here and there, but for the most part I stuck to that list to help me create my world. I recommend this technique to other artists and publishers because it really helped me to step away from whatever defaults pop culture put in my head and make a fun set of characters that a wider audience could relate to.

I put a lot of work into the design and art of Ghosts Love Candy. The game has taken a strange path since its creation, but it finally found a loving home at Steve Jackson Games. Thank you for taking the time to read this. I hope you enjoy haunting the neighborhood with your friends and family.