A New Type of Celestial for In Nomine

In a battle between good and evil, there's always a cry for "balance," for someone who doesn't follow the rules, but has ethics none-the-less -- for someone who dreams in shades of gray . . .

Gray Renegades are very rare, most often coming from the ranks of Lilim, Habbalah, and Impudites. Balseraphs, Djinn and Calabim are less likely to become Gray, and Shedim, by their nature as corrupters, find it almost impossible.

There are as many reasons to go Gray as their are Gray Renegades -- and a few extra, from the ones who didn't survive.

Habbalah have the most mechanistic rationale. Gray Habbalah are the ones who have experienced enough of their own "emptiness" resonance to relieve them of the belief that they are angels, but have acquired the possible delusion that they can walk the tightrope between selfishness and true good deeds, using their emotional-projection abilities against demons, Hellsworn, and other appropriate targets. Gray Habbalah also get to keep indulging in their own emotions, which may be part of the appeal.

Impudites and Lilim usually go Gray because of their natures: they get along well with humans and there are some evils that they just don't like (e.g., curtailing freedom, for Lilim, and killing humans, for Impudites). Furthermore, Impudites didn't have far to Fall in the first place; it's a relatively small step from not wanting to "waste" humans to wanting to protect them in other ways, out of simple self-interest. Unhappy humans aren't much fun at parties. 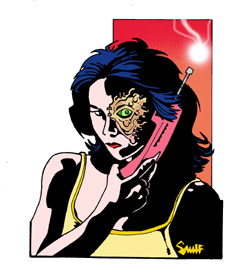 Lilim make very tempting Grays for a number of reasons: the Free Daughters have a certain motive to "buck the system" and do what they want, and Lilith's Rites are as suited to a freedom fighter as a terrorist. Their pseudo-angelic resonance (Perception-based) can be used to justify the notion that they, unlike just about all other demons, can actually perceive a little of the True Symphony -- they just have their own personal theme that sings loudest in their pretty heads. They're also the most likely demons to fit into a group of angels -- by their nature, they can be Geased into something resembling trustworthiness. (And betrayal, of course, but that's such a minor detail when they're so cute . . .)

Balseraphs might be able to go Gray, but their utter selfishness usually keeps them from even realizing other beings exist, except in so far as they affect the Balseraph in question -- the Liars went from the Most Holy to the Most Unholy, in one unbroken step, and it shows. Calabim, likewise, are too short-tempered and destructive; too likely to lash out at the innocent as well as the guilty. Both types, when Gray, often suffer from hideous mood-swings as they strike at what bothers them and then grow remorseful upon realizing they did something "evil."

Gray Djinn are almost nonexistent because they simply don't care enough, either way. When they appear, it's usually because someone has managed to drag them along into Renegade-hood -- Lilim and Habbalah are especially good at manipulating Djinn through the Djinn need to be cared about. Impudites can be quite charming as well, but the Djinn's Will needs to be fairly low for that approach.

Shedim, of course, have the worst time of it. They must corrupt their hosts, and failure to do so generates dissonance and Discord. While having lots of Discord may be a selling point for Redemption ("Hey, look, I've been playing nice with my hosts!"), it doesn't do anything for a Shedite who wants to stay free of authority and play nice with its hosts. The only so-called "Gray" Shedim must inhabit the bodies of humans who are already Hell-bound (in the Shedite's opinion, at least) and corrupt them to the point of death without harming others -- too much. "Gray" Shedim are neither nice nor safe to be around, unless they're one of the lucky types with a Band attunement to let them get around the corruption problem. Asmodeus' Shedim have this ability . . .

A final type of Gray is a new-Fallen angel who hasn't gotten around to pledging loyalty to a Prince, and isn't sure he wants to. He still remembers his former nature, or at least his old habits, and may harbor delusions of eventual Redemption. Some new-Fallen Habbalah might scorn the suggestion that they would work with a Demon Prince -- though there are "angelic" Habbalah Princes for these "tough cases" to approach.

All: Even if they can find an Archangel willing to give them a chance -- which is rarely an easy task -- demons do not always survive Redemption! (PC Demons will, but they aren't supposed to know that they're player characters.) Simple fear of destruction works well to justify anything, in a demon's self-centered mind.

Balseraphs: Arrogant and paranoid, Balseraphs might not want to do the humble pleading that most Archangels require. Furthermore, a Balseraph is skilled at constructing realities in his head -- he may worry that his sincerity is a lie that fools himself. And his paranoia will always be niggling at him, telling him that a "sympathetic" Archangel will grab him up and destroy him, laughing.

Calabim: Calabim are destructive and temperamental. Sometimes, they simply can't muster the right attitude that would let them survive asking an Archangel for help. Knowing that, they don't try.

Lilim: Gray Lilim are hit with a double whammy -- in the first place, they're none too fond of binding themselves to service; even formerly-Bound Lilim, once on the run, might think twice about doing that again. In the second place, they've usually got a Geas or 20 on them, and Lilim can be tracked by their Geases and made to do nasty, nasty things . . . Even a truly repentant Lilim might not bother asking an Archangel for Redemption, knowing how her Geases ruin her value.

Habbalah: The ability to project emotions is powerful. Habbalah are deluded anyway, so it's not hard to imagine that they've swapped one delusion -- "I'm an angel keeping the weak and unworthy from Heaven, punishing them as is God's will" -- for another: "Okay, I'm a demon, but I'm more effective this way, so I'd better stay a Habbalite and fight demonic influences, as is God's will." And they get to stay sexy and loving it.

Shedim: Shedim do disgusting things to their hosts. It's a rare angel who will bother to listen to a Shedite, so see "fear of destruction," above, as a reason why a Shedite might try to go Gray instead of seeking Redemption.

Impudites: Being an Essence-battery is a good thing -- in a group of demons, an Impudite is the next best thing to a cleric! ("I'm out of Essence after that fight! Medic!") Like a Gray Habbalite, a Gray Impudite may have convinced himself that he's more useful with his ability to drain humans -- taking care not to deplete any one human too often, of course -- than as an utterly pacifistic Mercurian.

As said before, Gray Renegades are incredibly rare: it is very difficult for a celestial to balance between the selfish impulses that make him a demon, and the selfless urges to right what he considers to be wrongs. Most Grays either backslide into evil, trying to be Bad enough to return to Hell without being killed outright, or tire of their halfway state and find a sympathetic Archangel to Redeem them.

Because they're working against the plans of Hell, and because they might go Bright, Asmodeus hunts Grays -- which means that if you have several of them in a group, they're going to be a top priority with the Servitors of the Game as soon as somebody finds out.

Gray Renegades are also likely to interact with angels from time to time, and many of the "softer" angels think Grays are just Redemptions waiting to happen. Sometimes they're right, sometimes not, but occasionally one will try to play "missionary" with a Gray or six. Dominic considers that this is just asking for an Outcast or Gray new-Fallen -- and so his angels go around hunting Grays. He'll tolerate one or two Gray Renegades, if they seem on the path to Redemption and are staying put with their angel buddies (as opposed to skipping town), but triads will be coming around monthly to make sure the angels aren't slipping and the Renegade isn't plotting something evil.

All of this means that, if the PCs are a group of Gray Renegades, they have the attention of the Heavenly Inquisition and the Infernal Secret Police. They are probably one of, at most, three groups of Grays. Their survival value is low -- this will become a "fugitive" campaign sooner or later, and the players and characters should both be aware of that. While the campaign can be run on just that level, the primary reason to go with Gray Renegades instead of Outcasts or normal Renegades is for the moral and ethical dilemmas -- is the group stable, singly or individually, or are they sliding towards Redemption? Or are they backsliding to evil? Will they wind up betraying angel friends, demon allies or each other? Can they beat the odds?