"He's ever so nice, that Mr. March." The cleaner leaned on her mop, sloshing the soapy water round in the bucket. Her blonde hair hung in a loose bell round her face, and her flowered nylon dress flapped round her legs in the breeze as the door shut.

"I don't know." The young man with the pile of letters stacked in his arms chuckled, and kept on stacking them into mail slots. "Johnson, Jones, Jother . . . no, he looks nice enough, but have you seen the way he acts at meetings?"

"And how likely am I to get invited to meetings?" the cleaner snorted.

Outside, the policemen were climbing into their car. The street lights glittered in the growing dusk of evening. One policeman snapped at his colleague as he slammed the car door. None of them looked happy.

"Okay, okay." The mail-sorter shrugged. "Matthews, Merton, I think that's Mittons -- did they spot anything?"

The cleaner's voice didn't change tone. "I don't think so. They just spent a while poking around, requisitioned some of the sets of files that dealt with the arson cases, and said they'd be back tomorrow."

There was a clattering sound from the stairs, and the cleaner lifted her mop out of the bucket and began scrubbing at the floor as a young woman in a crisp business suit turned the corner of the landing, and came running down the last flight. She nodded absently to the cleaner and the mail-sorter as she walked past them, and the door clicked shut as she stepped out onto the street.

"Is that the last?" the mail-sorter asked.

The cleaner nodded. "It'll be two hours now before the night-watchman comes to sign us out."

"Good." He slid the last few letters into their slots. "All right, you take the upper room, I'll take the lower room, and we'll see if we can work out what the Tether-potential here is that Bridget was going on about. We've got all night to work, and the Game won't be back till morning . . ."

"We want a book of Tethers."

That's how the Liber Castellorum started. I admit, my first reaction was, "A whole book? Isn't that overkill?" But I got to work, preparing an outline that would satisfy people. First, we needed the rules of Tethers -- that was clear enough, since there were a lot of questions raised in the short section on them, in the main In Nomine book. As the book was pulled into shape, though, I became a convert. Even the sample Tethers, which I'd previously been a bit dubious about -- for couldn't a GM just come up with his or her own? -- became valuable, since they weren't just places, they were examples of how to interpret a Superior's Word and personality.

Unusual Tethers, such as Michael's The Burning Grounds (Liber Castellorum, p. 86), were the most helpful -- while a Major Tether was obvious, the Unusual ones often cast light on the edges of a Word. The Burning Grounds didn't have much to do with actual combat, but the humans whose deaths created it never yielded or broke.

It wasn't always easy to keep a dozen authors consistent. For instance, I got Jo Hart to give me a Tether for the "Castella Mundi" chapter (and somehow she got left off the Table of Contents list!), and then made her rewrite it -- twice, which she put up with, with good grace. Here's one of the original versions . . . 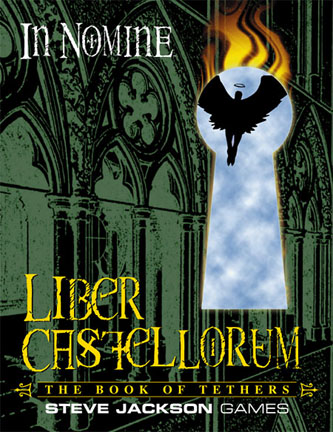 Originally attached to the U.S. Public Health Service, this laboratory in downtown Atlanta struck a natural resonance with Hell in 1932, when researchers based there signed the first releases for what was to become known as the Tuskegee study. This research marked a shameful milestone in the history of human experimentation, and involved doctors deliberately lying to patients and withholding treatments which were known to relieve syphilis, to better study the effects of the disease.

After stabilizing the Tether, Vapula professed his personal approval of its ambiance, and has taken close interest in the studies and methods pioneered within. Generations of researchers have felt an uncomfortable change in the emotional atmosphere when one particular professor enters the lab, despite never exchanging more than a couple of words with him.

Erg, the Shedite Seneschal, constantly strives to insert Technology's infernal influence into the mundane functions of the CDC. This major Tether is also responsible for facilitating the provision of human test-subjects to properly authorized demons worldwide.

As the material was written, it became clear that a single page was too short for the sample Tethers. I expanded this to 750 words as the ideal, and blessed anyone who came in under that. This did, however, eat pages, which were primarily stolen from the Adventure Seeds chapter. So, partly to trim down there (and partly because it fit better in the Castella Mundi chapter), James Cambias' evocative House of the Morning Star was moved (to p. 113), and lost a paragraph of adventure seeds . . .

(For those who don't know, the House of the Morning Star is a Tether -- to Lucifer directly. Within it, is a woman who . . . loves him. But no one knows she's there, not even the Tether's Seneschal, a Habbalite named Ramilo, who has been forbidden to ever enter the building that is a part of him.)

There are several ways a group of angels or demons could learn about the house.

* They might come across a reference to the old legend in a tour guide or book of folklore, and decide to follow it up; alternatively a Superior might order them to investigate the matter. Given that success is likely to be more dangerous than failure, this simple mission can easily become very complicated.

* Celestials in New Orleans might come across Ramilo and his "Satanist" servants in the course of some other operation. They're obviously guarding something pretty important, but what is it?

* A group of Infernals might be drafted for emergency service by Ramilo, especially if a powerful bunch of angels are in town and are getting too close. Ramilo won't want to tell them what it is they're guarding, only that it's important to someone very powerful.

* If another Prince is getting close to learning about the house, Lucifer might take some unusual steps to preserve his secret. He might even approach some Outcasts or Renegades with an offer: stop the Infernal agents and gain a really powerful ally. Of course, they don't call him the Father of Lies for nothing.

Alain Dawson (now Managing Editor) informed me that they'd like to use more "pull-quotes," such as debuted in The Final Trumpet. I suggested "letters" to or from various Seneschals and solicited some from the various authors. I think the one for Jordi is most entertaining, on p. 82. (When I saw these later, I was vastly impressed by what Alain did. I'd been thinking "suitable borders" but she made some really neat designs.) Genevieve Cogman was especially helpful with providing entertaining letters. Of course, we gathered enough that not all of them could be used . . .

Files on testing of 01-5777-TH3 attached. Please read and comment; Ithuriel believes we may have exceeded our safety margin on coolant front. Ithuriel also notes that we had three attempts by hypothesized Vapulans to access our server. Therefore request highest priority of security. Note that War requisitioned newest taser design for defense during recent attempt by Servitors of Fleurity on town water supply. Weapons testing notes should be included in next report. Please clarify last report of yours on discovery of empty box bearing Makatiel sigil.
-- Hadad@Lab16634

. . . yes, I would be delighted to get my hands on the sixteenth century Olaus Wormius translation. Thank you for looking out for it. I enclose the latest microfiches of children's fiction, and will be glad to supply whatever you think will be useful for your library. How are you doing with that policeman you mentioned? It has struck me that somebody with the destiny you saw is quite likely to have demonic interference -- especially considering the tenement fire you talked about -- so please don't hesitate to call in help if you need it. A last note; Sithriel has Fallen to Kronos. Grieve for her, and make sure that any of your operations she knew about are changed or guarded.
In faith and hope -- Besodaiah, at the Bodleian

. . . the bearer of this letter has been trained, and should be ready to serve you in any way you want. Let me know how she behaves. Otherwise, I've been told there are a couple of Mercurians of Creation coming your way as part of a traveling sculpture exhibition -- lecturers or whatever, both male vessels. If you could get hold of them or corrupt them, I'm sure our Master would be pleased. Oh, and let me know if that preacher you complained about is still making trouble. I may be able to pull a string or two with one of the people funding him.
Till we touch again -- Berothai, Seneschal of Esseintes

Yes, I have seen that the senator's wife is due to come in shortly for an eye operation -- we'll see to it that she comes out again adjusted as you've requested. If in return you can swing the medical funding for the area, it'll allow us to expand our range. We've been considering linking up with a couple of Servitors of Beleth who approached us, to allow for more effect on the patients -- have you any comment on this as a strategy? Oh, and I've directed an Impudite of Belial your way, one Semiramis; she's interested in something largescale, and I remembered what you were saying about that annoying local charity. Let me know how it goes.
Watching -- Mibzar, at the Hospital

The table of contents was easy (though Jo Hart somehow slipped through a crack, drat it), but the index was a royal pain. Armed with the resources of the World Wide Web, I dug up the country or state of each listed Tether -- whether that data was in the Tether-description or not -- and put an index-entry in for that country or state, so that GMs could find all the listed Tethers for an area easily. Need to know how many Tethers are in London? Look in the index, under England. How many in California? It's in the index, under C. This is where the Nutshell gets many of its playtest credits for, as I talked online with friends, augmenting my braindead geographical knowledge. (And while writing this article, I discovered non-harmful errata in the index, at Jean's entry -- hurrah for the errata coordinator!)

Once everything is done, I sat back and pant, thinking that the whole process was kind of exhilarating. When I held my "first-born" in my hands, a few weeks later, I was even more giddy -- the cover looks great, the interior art is overall lovely. Oh, yeah, there's text in there -- though by that time, I could have recited half of it by memory.