An app for the iPad, iPhone, iPod touch, and Windows Phone 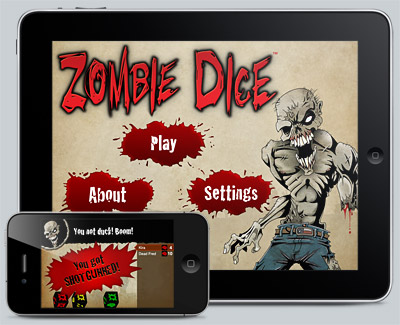 Zombie voice by Will Schoonover

Based on the original Zombie Dice . . . but now the dice, and a zombie opponent, are in your iPhone, iPod Touch, or iPad! And it's free!

You're a zombie, racing to be the first to eat 13 yummy human brains. But those humans fight back. Press your luck. Keep rolling, keep collecting brains . . . but if you get three shotguns, you're out!

Enjoy the zombie animations and sound effects (Braaaaaaaiiinnnns!). The zombie will talk to you after every roll, just like a human opponent . . . but remember, he wants you to LOSE!

If you like the game, you can upgrade for only 99 cents (the price is a no-brainer!) and get more zombie goodness:

(After downloading, drag these to iTunes to install them.)