Is it a star or is it a fish? It’s neither! It’s a brand-new set of beautiful d6s, one of six designs in our Ocean series! Use them to add a little undersea flare to any game that uses six-sided dice. It’s the Caped Crusader vs. the Masters of Mayhem!

The criminals of Gotham City are competing to see who's the greatest Super-Villain of all! In this mischievous Munchkin mash-up, players take on the roles of classic Batman baddies, battling against their competitors to commit crimes, foil Batman, and escape Arkham Asylum. The first player to Level 10 rules Gotham! Who will it be?

This deluxe-sized box contains a whopping 261 full-color cards and six double-sided Villain cards, as well as a gameboard, standies, and one custom Munchkin-head die. 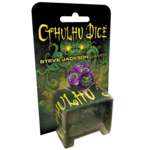 Serving Cthulhu is fun . . . except for all those other cultists out to get you. So get them first!

Cthulhu Dice lets you drive your rivals mad . . . very, very quickly. Players take turns rolling the big, beautiful, custom 12-sided die embossed with tentacles, Elder Signs, and more. Destroy your opponents' sanity! Better yet, steal it. But watch out for Cthulhu -- when he comes up, he takes sanity from everyone! 18 glass Sanity marbles are included. Lose all your marbles and you're mad. The last sane cultist wins . . . unless everyone goes mad together. Then Cthulhu wins! Grab the coolest cats you can find for some bug-slappin' action in this speedy card game of swift thinking and quick paws! Super Kitty Bug Slap is a fast-paced game that lets 3 to 5 players see who has the most skills. When the game ends, the coolest kitty with the most cards wins! It's a literal blast from the past! The classic Autoduel computer game from the 1980s is back for modern machines. Create a duellist, build the car of your dreams (or at least budget), and hit the open roads in search of fame and fortune . . . or just to stay alive!

This software – designed for Windows 10 and above – uses the data files of the original release as its foundation. Its system requirements are relatively modest, but if you're running this on a significantly underpowered machine, it may struggle. Note that this is an archival release; although it should be playable, it will likely be quite buggy. Drive at your own risk! The future is here, and it's awesome! This issue of Pyramid presents 12 articles and features designed for futuristic gamers. It includes a quick-and-dirty GURPS guide to adding scientific knowledge to your campaign, ready-to-use planets and locations, a new temporal-based power for GURPS Psionics, a guide to using GURPS Action as the basis for a GURPS Reign of Steel campaign, and more. Excitement is here, faster than light! 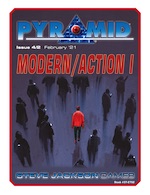 Get ready for action! This issue of Pyramid offers 12 articles and features of interest to modern and near-modern gamers, including material for GURPS Action, real-world resources and locations, steampunk monsters, and even an assortment of ready-to-use vehicles complete with GURPS stats. The world outside your window has never been more exciting!