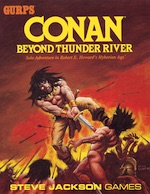 A Savage Horde Is Out for Blood

. . . And only the mighty Conan stands in their path!

When the army of Aquilonia marched across Thunder River and into savage Pictland, the tribes of the Picts were driven away. To secure his rich new territory, King Numedides built Fort Tuscelan, a powerful outpost meant to keep the barbarian Picts from striking back.

But Numedides' lone fort is not enough to stop the Pict raiders. In recent days, the ruthless natives have burned Aquilonian homesteads, raided merchant caravans, and brutally murdered several soldiers from the fort.

For the Picts have united behind a sorcerous leader: the great witch-doctor, Zogar Sag. Even now, he is raising a vast Pict horde to crush Fort Tuscelan.

You are Conan of Cimmeria, commander of the scouts at Fort Tuscelan. Can you stop Zogar Sag and his army?

GURPS Conan Beyond Thunder River is based on the story "Beyond the Black River," by Robert E. Howard. In it you'll find:

All of Aquilonia is depending upon you to save the land Beyond Thunder River!

(This is a reprint of a GURPS Third Edition product. Its interior is based on a scanned copy of the first print version, so there will be imperfections compared to modern all-digital releases.) 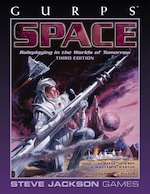 A Universe Without Limits

A classic becomes classier in this updating of the definitive guide to science-fiction roleplaying. Previous editions of GURPS Space offered a comprehensive set of tools to design your own starfaring campaigns, from space opera to hard science with any stop in between. Substantially revised and expanded for GURPS Third Edition, this edition:

In addition to the above topics, GURPS Space offers an inventory of science-fiction equipment from lasers to force swords, treatment of classic science-fiction character types, advice on creating planets and the cultures that inhabit them, and much more! 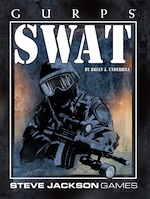 From small-town crisis units to the FBI's Hostage Rescue Team, from the urban sprawl of Berlin to the mountainous wilds of Idaho, GURPS SWAT covers the dangerous world of tactical police operations. Serve a warrant on a meth lab, protect a judge whose life is threatened, rescue hostages from international terrorists, or take down a barricaded suspect before they kill again! Establish perimeters and begin hostage negotiations. Perform a stealth entry if you can, or blow down the door in a swift dynamic assault!

The lives of innocent hostages are at stake. Do you have what it takes to be the best of the best? Put on your armor, grab your weapon, and find out . . . The Greatest Hero of the Hyborian Age Was a Barbarian: Conan of Cimmeria!

Black-haired and sullen-eyed was Conan, a thief, a reaver, a slayer, with gigantic melancholies and gigantic mirth. Cycles of legend revolve around his name, glimpses of a world before history, where evil wizards performed dark sorcery, and where the fate of an empire turned on the strength and skill of a single sword.

GURPS Conan lets you enter the Hyborian Age, when shining kingdoms lay spread across the world like blue mantles across the stars . . . Zamora, with its dark-haired women and towers of spider-haunted mystery; Zingara with its chivalry; Stygia with its shadow-guarded tombs; Hyrkania whose riders wore steel, silk, and gold; and powerful Aquilonia, the proudest kingdom of the world.

Based on the Conan stories by Robert E. Howard, L. Sprague de Camp, and others.

(This is a reprint of a GURPS Third Edition product. Its interior is based on a scanned copy of the most-recent print version, so there will be imperfections compared to modern all-digital releases. GURPS Magic for Third Edition is also helpful to use this supplement, but not required.)