The Not-Too-Gentle Art of Parody 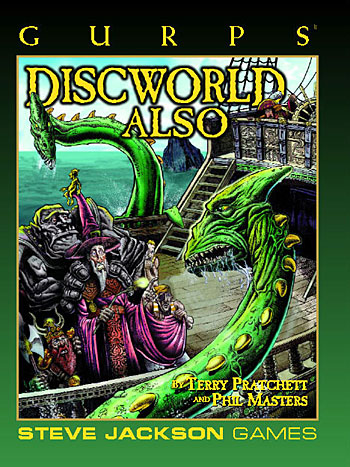 Writing GURPS Discworld a couple of years ago was enormous fun and a privilege, but it was also, inevitably, a somewhat constrained process. I was looking at a world which had been developed, in depth and width, over twenty-odd novels; my primary job in that book was simply to convert it to GURPS game mechanics. GURPS Discworld Also is a slightly different beast.

It's partly an update and expansion of the stuff that appeared in the first book, of course, mentioning plot events from recent novels (such as the attempted vampiric take-over of Lancre, from Carpe Jugulum), providing rules and numbers where necessary (such as the skills involved in operation of the new semaphore system that first appears in The Fifth Elephant), and sometimes simply providing New Game Stuff (such as racial packages for assorted minor sentient species and beings). It also allowed me to apply some newer GURPS concepts to Discworld games, like the whole chapter of character templates (which, incidentally, are also mostly applicable to other fantasy games).

However, the greater part of the book consists of an extended treatment of the Discworld as a venue for games. Not that the first book didn't cover that, of course, and from what I've heard, plenty of people have been using it for RPGs just fine. But it this book, I wanted to play with some variations. The Disc is a world, and I wanted to show a little more of what could be done in that direction, working outwards from the (wonderfully rich and varied) material in the novels.

The Tools to Hand

One big trick I used was parody. The Discworld novels are a lot more than parodies -- they're social comedies, action-adventure stories, novels of character, and sometimes good old-fashioned slapstick farces -- but parody and satire have been recurrent themes throughout the series. The range of targets has been wide, from British public school stories through RPGs and revolutionary politics to Hollywood and rock and roll, and the tone has ranged from the affectionate to the savage.

So I felt entirely justified in running with this idea. The real world is pleasingly full of stuff that can be parodied, and Terry Pratchett hasn't got around to all of it yet, so I had a good range of targets. I paid particular attention to the games industry; aside from being familiar to the potential audience, these sorts of thing can make for interesting games in themselves. For example, I think that the idea of playing Cart Wars in EcksEcksEcksEcks is not only a logical extension of something first seen in The Last Continent and a modest joke about something close to home round here, but also a viable game on its own account (and an interesting use for the GURPS Vehicles design system, and proof of its flexibility).

But just as the Discworld novels work as novels, not just as parodies, I wanted the campaign outlines and scenarios in this book to work as "pure games." Indeed, the town of New Smarlhanger isn't a parody of very much, but is (I hope) a place where good games can be set, and "Walking the Spiral" is mostly an excuse to take a bunch of PCs round as much of Ankh-Morpork as possible (with, admittedly, some gags about the computer business). Is Port Duck a parody of two popular (but deeply parody-worthy) types of movies, run together, or is it a place where two different types of swashbuckling adventure story can be played out, more or less straight? That's up to the people who play with it, though I like to think that they'll be able to manage both, often in the same scene.

And there were always questions of getting the flavour right. Pratchettian parody is subtle, and often has a point (and a kernel of realism, of a particular sort). Anyone can crack a few feeble puns on the names of people or things, or make parody versions of clever characters stupid or big things small, but good comedy should do more than that. When I created a tough, swashbuckling renegade cop for Port Duck, I could have made him clumsy and inept, but that would hardly have been plausible from the plot point of view, so I made sure that he was every bit as tough and agile as he needed to be. However, I then asked myself what an objective observer might think of a swashbuckling renegade cop, and what his reasons for this behaviour might be. I came to the conclusion that, well, he certainly looks like a vain poseur. Is that the whole story about him? Maybe . . . But the book has to leave a few questions open.

It also became clear that some subjects might work better than others. The Discworld novels may go after a wide range of targets, but they do have their own consistency, and their fans have quite strong feelings about anything that compromises their integrity. I tested this a little with one long sidebar I included in my first draft. It's a parody of a particular, well-known bit of pop culture (and, perhaps, a tribute of sorts, with a bit of irony). When it hit playtest, some people liked it; others reacted quite strongly against it, clearly feeling that it wasn't Discworld. I could, still, argue the point in its favour, but in the end, it had to come out. I'm including it here, though, partly because it does seem to work for some people, partly as a demonstration of how to take a familiar idea and give it a Discworld twist, and partly as an example of the sort of thing that stretches the limits.

(I should emphasise, though, that while much of the book is not "official Discworld" -- as I said, it's an exercise in taking ideas into new territory, for the sake of gaming, and indeed some of it may be superseded by future novels, if Terry so chooses -- this particular idea is doubly unofficial.) 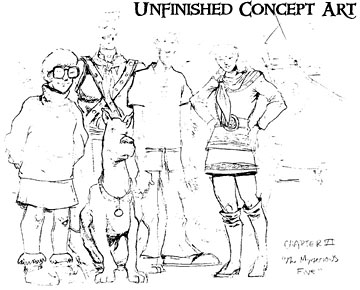 The Mysterious Five are an NPC group who can be encountered almost anywhere on the Disc, mostly as a red herring, although they do come with a full-scale plot buried in their background. There are five of them (if you count the dog, which seems somehow obligatory), travelling in a garishly-daubed cart. They may at first appear to be Ecksian backpackers (especially the two blond ones), but their lack of distinctive accents gives the lie to this.

The truth is that the group is a by-product of wizardly eccentricity. The solitary wizard in question was experimenting with permanent variations on the Morphic Tweaking spell (p.DI140-141), and took, as an experimental subject, a female hamster who he had decided was too undignified to appoint as his familiar. He transformed it into a semi-human female form; the only flaw in the result was that the hamster, having been rendered more intelligent by the spell, is now convinced that she is a genius. (She is actually IQ 7, but with Overconfidence.) She has picked up a working grasp of certain clichés from somewhere, and thinks that all geniuses have poor vision; at her insistence, the wizard even gave her a pair of eye-glasses to "cure" this, but they actually distort her perfectly adequate eyesight (giving her -3 to vision-based rolls). The wizard kept her around his tower as a harmless if useless amusement, naming her "Wilma" (after his sister, who he had never liked).

Then the tower was attacked by a group of "heroes"; a hulking blond barbarian, an enchantress, and a fairly benevolent werewolf, who had heard rumours and taken him for an evil wizard. (He wasn't evil, just misunderstood.) The wizard may have been mad, but he was ready for this sort of thing, and dropped a net and some stunning spells on them when they were half-way up the first staircase. He wasn't sure what to do with them, but decided to start by trying some experiments on the werewolf, splitting its human and wolf aspects into separate beings. However, each aspect retained some odd features; the human part seems barely human, and what should have been the wolf part, being heavily influenced by its human-socialised nature, turned into, well, a dog (looking to have about equal parts Great Dane, Labrador, wolfhound, and spaniel).

Then Wilma, who had taken a liking to the prisoners, tried to free them. The wizard, irritated by this, decided simply to throw all five out. In order to avoid having them come back, he cast a series of mind-control spells on them, telling them "Forget all about me. In fact, forget all about magic. Tell yourselves there's no such thing. And forget this heroic nonsense. Just go away and play tourists or something."

The Five did indeed forget everything he told them to, and took up the lives of wandering tourists, complete with new names. When Wilma unlocked the cell holding the barbarian, on whom the wizard had already cast some befuddling spells, she said "You're freed now," and as a result, he now answers to "Freed," that being the nearest thing to a name that anyone's offered him. He is ST 18, HT 13, and Attractive, but displays no other significant skills, having been obliged to forget everything about the heroism that was previously his entire life. And the former enchantress, her old, nigh-unpronounceable name now shortened to "Narcissa," has likewise forgotten her former array of supernatural powers (though she remains the most organised of the group).

As for the two beings who were once one werewolf, they continue to hang around together, sensing a kinship. The near-human part is known as "Scruffy" (because he is), and the canine part is called Scruffy Too. The wolf's barely-controlled hunger for flesh has been transmuted into a shared tendency to snack at every opportunity, and a willingness to try anything edible once, including hallucinogenic fungi. That aside, Scruffy can be treated as an Unattractive but otherwise average male human, while Scruffy Too combines un-canine intelligence with all-too-canine curiosity and clumsiness; consider him to have IQ 7, DX 10, Move 7, and the Insatiably Curious (p. CI89) and Total Klutz (p. CI82) disadvantages.

The Five's biggest problem, apart from their lack of useful skills and general cluelessness, is their conviction that magic, and even things like perfectly normal trolls, don't exist. Faced with any situation or problem involving the supernatural, they charge in, announcing "You can't fool us," and try to expose the conjuring tricks or pull the "masks" off the monsters. They are thus likely to require a certain amount of saving by less deluded folk.

It would take truly superhuman magical powers to fully restore their old selves. However, optionally, at times when they are out of sight of any PCs, their old adventuring skills might surface temporarily (and unconsciously). PCs might walk into a room and discover carnage wrought by Freed's combat skills, Narcissa's magic, or either of the Scruffies' lycanthropic fury. Wilma may just temporarily disappear, leaving only a confused-looking hamster. This could become the basis for a running joke, or a particularly warped murder mystery. (Don't forget that some of these people did used to be professional killers . . . )