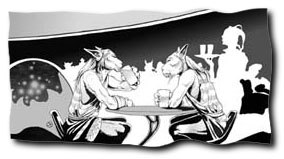 Ah, I see you have time on your dewclaws. Come; gather round, and I will tell you of rulings I have made, and the reasoning of them, that you may better understand the precedents and the laws by which the fteirle are governed.

I became an earleatrais 18 ftahea ago, on a planet the hisoli call "Earth"; the case then was a simple one . . .

In a way, designing the Aslan was like coming home for me; in a previous life, I was involved in a project to detail the Riftspan Reach for Classic Traveller; that fell through -- all that remains of it now is the sector name -- but it began my involvement with the fteirle.

As Mary Norton said, no story ever finishes, it's just that at some point we stop telling it. That point has almost come for Alien Races 2, but let me tell you just a little more. To help me, joining me tonight are Iroioah of the Yerlyaruiwo Clan, from my playtest campaign, and Shel Meldol, IISS, who has been in the game -- how long is it now, Shel? (Heh. Me and Franklyn go back to '78, but we're the only ones left from those days, now.)

The ealeatrais is not moved by his own spirit alone; he must consider all that went before, every similar case considered by his honored forebears under the laws of his clan . . .

Thank you, Iroioah. In designing the Aslan for GURPS Traveller, I was bound by three main constraints.

The first was the commercial necessity of avoiding anything which had first appeared in a Digest Group Publications product, for copyright reasons. (And it would have been an action without honor, for which your life would have been forfeit.)

Thank you for reminding me. This ruled out about half of the published Aslan language -- including the gender-specific dialects -- and the majority of the high-level descriptions of sectors within the Hierate, but had little impact elsewhere. Many groups still use these, so I decided that if I couldn't use this stuff, I would at least officially not invalidate it! For this reason, I avoided making up new canon to replace DGP ideas wherever possible.

The second constraint was my desire to be faithful to all previous incarnations of the Aslan. I wasn't able to achieve this completely due to discrepancies between the published sources, but I hope I came close. Where conflict was inevitable, in the spirit of the GURPS Traveller line, I have given Classic Traveller precedence. Sidebars in the Aslan chapter suggest how to reconcile the remaining discrepancies in your campaign.

Thirdly, I wanted to leave some mysteries unsolved. If I'd answered every question, filled every loophole, it would have made life harder for future writers, who have to stay consistent with everything previously published; more importantly, every mystery explained is one less scenario your characters can play. Plus, the publisher has a word count target, and at the end of playtest I was 17% over it . . .

When I started researching the Aslan, there were a few apparent inconsistencies from edition to edition.

Assassins in Classic Traveller (CT) were a kind of Aslan Special Forces -- assassin training is exactly parallel in the character generation sequences to commando training for humans. In MegaTraveller (MT), they became a combination priest/bounty hunter, tracking down the dishonorable and challenging them to duels. Special Forces seemed more logical to me, given the number of assassins produced by the character sequence; Marc Miller and Loren Wiseman agreed that this was a valid interpretation. Not wanting to invalidate the bounty hunter angle for those who prefer it, I got to wondering: How does an assassin get glory, honor and live fire training in between clan wars? Thus was born the idea that assassins who are "resting" or invalided out of the service can be hired to right wrongs, either via a female relative for cash or directly as a "favor" (debt of honor).

Female Aslan are officially noncombatants, yet in CT can learn Field Artillery skill. My thinking here was that males want to get up close and personal with the enemy, so indirect fire wouldn't appeal to them; therefore they redefine artillery as technical (women's) work.

Kuzu appears in at least three different places in Traveller canon; the main two are Dark Nebula 1919 and 1225. While it has little impact on the average game, I wanted to get it right. Hans Rancke-Madsen argued cogently for 1225, advancing the opinion that at two parsecs from the Solomani border, 1919 was too close to human space for the Aslan to have stayed independent. My main motivation was simpler; CT said 1225 (or sometimes 1226), and as far as I could tell Kuzu didn't move to 1919 until MT was published. Again, Marc, Loren and I discussed it, and reached a consensus on 1225, so Kuzu is back home again. If you think it belongs elsewhere, one of the sidebars in Alien Races 2 offers you some reasons why it might be.

Ihatei and the Aikoho Earleatrais differ slightly from edition to edition. As far as I know, it isn't until Behind The Claw that ihatei are known not to be part of their clan until they claim new lands; if they're not part of a clan, why obey the earleatrais? Anyway, those who are not from Tlaukhu clans aren't bound by his decisions. I concluded that once settled and part of your clan again, you wouldn't want the earleatrais remembering you as impolite, and he probably knows local space better than you, so it makes some sense to listen to him. Add that to the fact -- stated in CT canon -- that disobeying an earleatrais in his jurisdiction is a crime of honor, and he probably has a lot of Aslan being polite to him, ihatei or not. 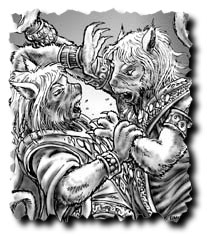 The earleatrais does not make his rulings in a vacuum, for he cannot impose them by force. Others abide by his decisions by their own consent, and this demands that their voices be heard before the final ruling is made.

Thank you. The Pyramid playtesters came up with a lot of valuable comments, and some of them made me think again on key issues. The single most important change was that cultural Aslan originally had only one option -- to take all 41 points of "cultural" disadvantages, which counted against the 40-point limit. The playtesters pointed out that this made them all pretty much identical, so that was rewritten to the present position.

There were several hundred suggestions to clarify this or that paragraph, either by rewriting it or moving it elsewhere in the manuscript. Most were adopted.

There are a few things that didn't make it into the final cut, even though they weren't ruled out on canon grounds. As I write, the main cuts are expected to be a few starships and the proposed generic landhold description and map, but since they may appear in Pyramid later, I'll focus on other topics here.

Aslan weapons aren't specified in detail. Most of them are slightly heavier versions of their human equivalents, with slightly larger magazine capacities; a number are explicitly stated in CT to be copies of Solomani designs. It didn't seem to me like a good use of a page to fill it with weapon stats that are essentially the same as some you already have in the Basic Set or GURPS Traveller (GT).

How do Aslan respond to anonymous insults? My personal view is that they ignore them -- anyone so cowardly that he dare not even identify himself when insulting you is beneath contempt, and his words carry no weight. An alternative would be for the insulted party to declare that he would be in the debt of whoever can identify the perpetrator.

Bardiche ("legally female" males) were suggested as a counterpoint to the "legally male" females mentioned in a sidebar. The reciprocity of this has a certain appeal, but personally I think Aslan society has enough females already. Your mileage may vary.

This is an issue for human clans, as they have a skewed gender distribution by fteirle standards -- too many warriors, not enough traders. Among the suggestions put forward to handle this on the playtest board and in the test campaign are infanticide, masses of eunuchs, bardiche status, raids by human clans across the border to steal women, and a thriving slave trade. Somewhere along the Aslan/human interface, there's a clan that's done whichever you prefer -- and there's a scenario for your campaign in each of them.

The Pathfinder and the story of how the Aslan reverse-engineered jump drive from a human shipwreck were omitted. The idea was Marc Miller's originally, but first published by DGP; the main reason for leaving it out, though, is that almost no-one in 1120 knows about it, and those that do aren't telling.

(Fah! You would question our honor? We developed jump drive ourselves! Your words lead to the circle, hisol'i!).

Look, Shel, take this guy outside and cause a diplomatic incident, would you?

My personal opinion is that the Hierate's multitude of competing states is a more likely future for humanity than a vast interstellar empire. Pursuing that thought backwards through canon history led me to note that the situation on Kuzu as the jump drive was discovered is a close parallel to Terra in the late 1940s, and you could make an interesting (if non-canonical) campaign by reversing the human and Aslan roles in history. Suppose the Roswell Incident in 1947 had resulted in an ihatei scoutship being dissected by a joint US/Soviet team, with other nations quickly building ships once the secret leaked out. The PCs are square-jawed agents of Majestic-12, troubleshooting among the stars using technology they barely understand, while a desperate UN tries to colonize nearby worlds before the fteirle find us or Earth's ecosystem collapses . . .

(Boss? There are three guys in black suits out here. They say they told you not to discuss this . . .)

(Ahem. This is the editor. Due to an unforeseen technical problem we will be replacing the rest of this item with some dance music . . .