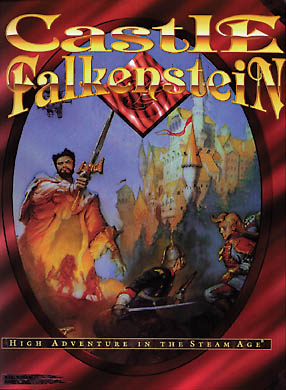 A lot of folks have waited a long time for Castle Falkenstein. Ever since Mike Pondsmith started talking about it over two years ago (back when it was being demonstrated at conventions under the code name Banana Slugs Go To Rio), the idea sure seemed neat. And it was this time a year ago that Pondsmith gave us a preview of the game in the pages of this very magazine, a preview that promised a game world that was very special indeed. Originally planned for release in the summer of 1993, Castle Falkenstein was, in every sense of the phrase, a much-awaited product.

The wait has turned out to be worth it. I really like this game.

I guess I should start by describing the game world. Castle Falkenstein is set in a magickal (they spell it with a “k” in New Europa), steampunk-ish alternate Europe of the late 19th Century. In New Europa, there is an England ruled by Queen Victoria and a France ruled by Napoleon III. Germany is split into several smaller countries including Prussia (ruled by the would-be conqueror Otto von Bismarck) and Bayern (the home country of most of the book’s main characters, as well as the magickal Castle Falkenstein itself). India is still ruled by the British; the Far East is dominated by the Dragon Emperors (who are real dragons); and ever since a bunch of Native American shamans got together and blasted St. Louis off the map to end their little Civil War with the United States and establish a second nation, America hasn’t been much of a power.

The world of Castle Falkenstein would be familiar to anyone with some knowledge of Victorian history, but it’s the little differences that give it life. You can not only meet Arthur Conan Doyle, but Sherlock Holmes and Dr. Watson, too. Jules Verne is the French Minister of Science, and Captain Nemo roams the seas in the Nautilus, plotting world conquest. Bismarck has been thwarted in his plans (so far), so there’s no guarantee that the 20th Century will unfold in New Europa the way it has here in our reality — but with the Unseelie Court working behind the scenes, there’s no telling what will happen.

The Unseelie Court are the real bad guys of Castle Falkenstein. The Unseelies (and their good counterparts, the Seelie Court) are faeries, but definitely not wimps. Immortal supernatural creatures, they can take many different shapes, and are responsible for most of the supernatural creatures of myth and legend — elves, dwarves kobolds, goblins, gremlins, nymphs, mermaids, ogres, leprechauns, banshees and even vampires. In whatever realities they discovered mortals, the faeries have been split about what to do about them. Half want to play with them, work a little mischief, have a little fun; the other half just want to wipe them out. In a subtle bit of trickery, Lord Auberon of the Seelie Court got the leader of the Unseelie (known as the Adversary) to sign a peace treaty with the mortals of this universe. The Compact keeps the Unseelie from declaring open warfare against mortals (faeries cannot, under pain of True Death, ever break their word); but the Unseelie have simply changed tactics, trying to get mortals to destroy themselves, by picking a promising despot (currently, Bismarck) and working behind the scenes to aid him.

Faeries have several dangerous powers, including shapeshifting, flight, etherealness (the ability to pass through solid objects) and glamour (the ability to create illusions). But they cannot work true magick — only mortals can be sorcerors. Magick is a science in Castle Falkenstein, with large bodies of lore assembled by groups of wizards meeting in secret societies, working together to cast spells of great power. The reclusive wizard, studying alone and jealously guarding his secrets from the outside world, is not a part of this game.

And then there’s what passes for “high-tech” in New Europa. Steam power is all the rage, and the Industrial Revolution is just beginning. There are rolling fortresses, delicate clockwork automatons, flying battleships, submarines, lightning cannons, and the ultimate invention that saved Bayern from Otto von Bismarck’s armies, the Magickal Engine — a machine that casts magickal spells.

Which never would have come about if it weren’t for a traveler from our universe being sucked into the world of Castle Falkenstein by a powerful magickal summoning cast by Lord Auberon and a powerful human wizard named Morrolan — a video game graphic artist named Tom Olam.

Oh, did I forget to mention Tom Olam? The whole first half of the Castle Falkenstein book is in the form of a collection of writings and drawings sent back to Mike Pondsmith from the other side of the Faerie Veil by the fictional Olam. We see New Europa through Olam’s eyes; he explains the game world to Pondsmith, and by extension, to all of us. And he does a great job. His prose is entertaining, and his art is exceptional. The first half of the book has the entertainment value of a novel, while painlessly introducing the reader to New Europa and its inhabitants.

Anyway, Olam was “spellnapped” to New Europa by a powerful Summoning that was phrased to go grab “something to help our King.” What the spell came back with was Olam; and for the longest time, nobody had any idea why. Until Rhyme the dwarf engineer discovered the copy of Leonardo da Vinci’s Codex Pacifica — the lost sixth book of da Vinci’s that had been destroyed in New Europa — in Olam’s backpack (just a souvenir of his European vacation). It was the information in the Codex that allowed Rhyme Enginemaker to fashion the first Magickal Engine, and from there to build the flying battleships that defeated Bismarck.

Olam has some other uses as well — New Europa’s “present” is 100 years gone by in the world he comes from. So he’s a very useful source of information as to what various historical players are likely to be planning — though since things have their differences in New Europa, he’s not always right . . .

Then there’s the second half of the book — the actual roleplaying game (or, as Olam and his friends call it, the Victorian Adventure Entertainment.) It seems that Olam described the concept of roleplaying games to his new friends in New Europa, and they took to it immediately, especially King Ludwig of Bayern and the Prince of Wales (Olam runs in some pretty fast circles). Once a few wrinkles were ironed out — for example, no Victorian gentleman or lady would ever have anything to do with an item as low-class as dice — the game was afoot. And it is the game that Olam/Pondsmith would have us believe that is being played in New Europa by the upper crust of society that we are to play here on this side of the Veil.

No dice? Did he say no dice? Well, yes. But this is not a “diceless” system. Cards take the place of dice, and do so very elegantly. Combat, spellcasting and all other sorts of actions are resolved by comparing a DC’s (Dramatic Character’s) skill level (Poor, Average, Good, Great, Exceptional, Extraordinary) against the difficulty of the feat, with cards played to boost skills as necessary. Different suits correspond to different types of activities, and since you can only hold four cards at one time, there will be times when your character can perform amazing feats of derring-do, and other times when he’s lucky not to stab himself in the foot.

The story is the thing in Castle Falkenstein. There is no character sheet in the game, and there never will be; players are instead encouraged to start a diary for their character, the first few pages of which describe the character’s background and his present situation. Some of the basic mechanics of the game — character goals, forces arrayed against you, skills you excel at, skills you are below average in — are worked in to this narrative, but as part of the story. No lists of stats or abilities for these characters; they are more literary in nature and less mechanical, and much more alive than collections of numbers can be.

The mechanics (such as they are) do a wonderful job of letting the story flow, and in Castle Falkenstein, the story is everything. And what a story! This is not a game of sullen anti-heroes, angst and moral dilemmas; this is a grand game of world-spanning plots, pure heroes and diabolical villains. Pondsmith has done a great job of setting the stage for grand dramatic battles between good and evil without once letting it descend into melodrama or parody. This is a game that believes in itself and its premise 100%, but without drowning in pretentiousness or self-importance.

In its own way, Castle Falkenstein is a response to the flood of “dark” roleplaying games that we’ve seen the past few years, a response that should make us all think about the games we play and what it says about us as individuals and as a society. Castle Falkenstein is not about self-loathing and finding redemption in a lost society; it’s about being a hero, and doing the right thing. Pondsmith hints (through Olam) that the reason our world is so screwed up right now is because we’ve lost those qualities of honor and virtue that make the inhabitants of New Europa so much more, well . . . let’s put it this way: given the option, Olam decides not to come home. And in a little flight of editorial fancy, Olam suggests that the Unseelie are at work in other worlds than New Europa, and their work is marching along pretty much unopposed in those other worlds. It would explain a lot around here . . .

Castle Falkenstein is a breath of fresh air in roleplaying, a game where real heroes matter and don’t have to apologize. The book is physically gorgeous, the game mechanics fit the tone of the game world like a glove, the writing is wonderful, and the game world is enchanting, in the most positive sense of the word. I feel very envious of Tom Olam; I hope the next time Auberon and Morrolan need somebody from this reality, they’ll consider spellnapping a certain Texas magazine editor . . .