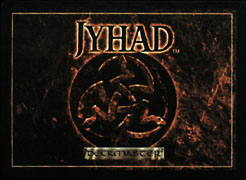 Well, here it is. The acid test. Magic: The Gathering was a huge hit, a great game, an inspired design, all of the above. Now, here comes Jyhad, and the questions are out there for everyone. Was the first game a fluke? Can Wizards of the Coast do it again? Designer Richard Garfield says there are lots of good, different game ideas in the trading card game genre -- is he right?

The answers appear to be: No. Yes. And yes.

Those looking for a sophomore slump out of Garfield and WotC will be disappointed -- Jyhad is a fine game. And the most exciting thing about it is this: it is significantly different from Magic. It is most definitely not a retread. This is proof (it seems to me) that Garfield was right -- there can be lots of good trading card games out there. Magic put trading card games on the map, but Jyhad establishes them as a legitimate game category, up there with roleplaying games, wargames, miniatures, play-by-mail and others.

Jyhad is a joint effort of WotC and White Wolf (published "in cooperation with," it says on the box). Based on White Wolf's Vampire: The Masquerade RPG and its World of Darkness setting, the players of Jyhad are Methuselahs, ancient and powerful vampires in constant warfare with each other, though that warfare is conducted through proxies and by indirect attacks and subterfuge. There are two types of cards: one (with the amber backs) represents vampires of various clans, strengths and powers, and the other (with green backs) represents equipment, mortal servants, special powers, combat modifications and everything else that comes into play.

In another major distinction from Magic, Jyhad is primarily a multi-player game. While it plays OK for two, Jyhad is best with four to six players. Play proceeds clockwise about the circle, with each player trying to eliminate the player on his left (his "prey"); the player on your right, therefore, is trying to eliminate you (the "predator"). Players can attack other players in the circle, but it takes special cards to pull off. When a player is eliminated, the circle tightens up and play continues until there is a single survivor. The last player "alive" doesn't necessarily win, though; there is a victory point system based on the number of players eliminated through the course of the game. It takes a lot longer to play Jyhad, especially the six-player version, than it does to knock off a quick Magic duel; three hours is typical.

Each player begins with 30 "blood points" (not "life points," obviously -- these are vampires, remember?), represented by markers. You use your vampires to "bleed" your prey, causing him to lose blood points, unless he blocks your vampires with his own. A blocking vampire goes into combat with an attacking vampire, and one could end up going into torpor or even be killed. But the object of the game is not to kill your prey's vampires, it's to get to the Methuselah behind them -- and besides, if you commit diablerie (killing another vampire) the other players could call a Bloodhunt against you, and then you're really up the creek without a transfusion.

So it would seem like that the key to winning is to have a lot of vampires working for you, right? Not so fast. It costs blood points -- some of those precious 30 blood points -- to bring vampires into play. The more you have, and the more powerful they are, the fewer blood points you have left in your pool and the more vulnerable you are. And all the really powerful effects and special cards in the deck cost more -- you guessed it -- of those blood points.

There are powerful vampires of each of the nine major clans in Jyhad, and all vampires have a variety of powers that Vampire players would be familiar with, like Celerity, Presence, Obfuscation and so on. Most of the other cards in the game can only be played on or by vampires of certain clans or with certain powers (a group of 30 or so icons are used to keep everything straight), so it's important to build a deck that works together (just like Magic). And, just like you-know-what, there's lots of different potent combinations, lots of different ways to win, and no "killer" unbeatable deck. Any combination of cards can be beat by some other combination.

And I haven't even begun to talk about the graphic design and art, which is pretty good, too. A few quibbles: there's an awful lot of icons to learn, and beginners will want to have a sheet handy that identifies them; and the rules could be clearer. But overall, Jyhad has everything a good trading card game should have: A good look, many ways to win, and lots of room for customizing your deck the way you want. This one's a winner.