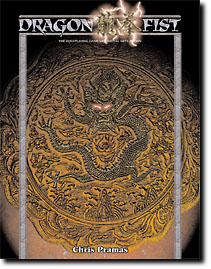 Published by TSR/Wizards of the Coast

Dragon Fist, a new game from TSR/WotC, gets its inspiration from the fast and furious martial arts movies of Hong Kong, in particular the wuxia genre. The design team, headed by Chris Pramas, has produced a compact game that captures the hectic action and raw power of these films. Even better, TSR/WotC has decided to make the game available exclusively in PDF format via download from the World Wide Web.

I have a somewhat germane confession to make: I hate AD&D. Because of that, I've been actively disinterested in everything TSR/WotC has put out in the last few years.

I've played in AD&D games before. I have even enjoyed the campaigns, thanks to the wonderful gamers I played with. However, the system itself confuses me and just seems too arbitrary and complicated for me to remember. I am always reduced to merely asking what dice I should roll now.

With that in mind, it felt odd for me to pick up a game that is an AD&D variant. Yet Dragon Fist is a great game that turned me into an unabashed fan within my first five minutes of reading the rules. They cut out most of the clutter in AD&D and introduced just enough add-ons to produce a system that is fast, playable, and cinematic. While some of the changes may sound similar to some of the upcoming features of D&D 3rd Edition, it is not a preview of . . .