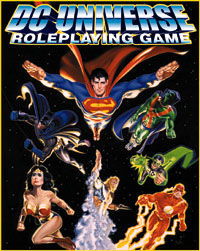 West End Games has fallen on difficult times of late, facing bankruptcy and losing its cash cow license -- their excellent Star Wars game -- to Wizards of the Coast. Now recovering, it has a chance to replace the license it lost with one it has acquired from another setting that has moved systems -- the universe of DC Comics. If the long-awaited DC Universe Roleplaying Game does well, the license could be the cornerstone of their recovery. Any publication by a gaming company is important, but it is especially important to West End for the DC game to live up to its many excellent licenses, especially the aforementioned Star Wars.

Did they succeed? Well . . . almost. The DC game uses the Legend engine, a one-success-per-die system that handles the critical issue of having Batman and Superman in the same universe surprisingly well. The power scales work reasonably well for a game that has to handle mountain-lifting powerhouses and city-stealing geniuses. The basic mechanics, while not invisible, work at a pace suitable to a game heavy on action, and the character creation system may be the most well-rounded to be found in a superhero game to date. Attributes and skills play an important role for characters at any stage of development. Most of the art is attractive and appropriate, but given the contributions from DC itself, this isn't surprising. The included (in . . .