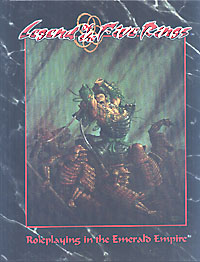 Legend of the Five Rings

Legend of the Five Rings is a roleplaying game based on the popular collectible card game by the same name. I have never played the card game, so I read the RPG with no preconceptions, and was pleased to find that it stands on its own very nicely. I have a great deal of nostalgia for FGU's classic game Bushido, and Legend of the Five Rings captures much of Bushido's Oriental swords & sorcery feel, with, thankfully, much more comprehensible rules.

Legend of the Five Rings doesn't actually take place in medieval Japan -- it takes place in a mythical place called "Rokugan," which happens to resemble Japan to an incredible degree . . . The designers make the point that despite appearances, Rokugan is not Japan, so you're free to invent your own details without worrying too much about "historical accuracy." However, the background is very well researched. I discovered a wealth of materials I'd never come across before, and I've done a lot of reading on medieval Japan. Some was made up for the game, but I found the integration seamless. It would be very easy to run a Legend of the Five Rings campaign in the "real" mythic Japan with few changes.

The rulebook is hardbound, and I thought an excellent piece of work, if a bit expensive. The artwork is above average, and the layout (including full-color inserts) is quite good. Some of the highlights are an illustrated equipment list of mundane items, . . .