"You're a infantryman in the 21st century. An Ogre appears on the horizon. You see a bright light. Make a new character."

Writing GURPS Ogre required a lot of speculation and expansion of the Ogre canon. Most of the extant Ogre material is wargame material; long on units and combat, short on roleplaying info. Some of the directions I expanded proved to be unsuitable or unbelievable -- but the great thing about "Designer's Notes" is that you get to show things that might have been.

In the official Ogre universe, the Last War was the product of increasing international tensions, incompatible ideologies, and a moment of stupidity in the North Sea by three sailors whose names are forgotten. In a slightly different world, the Last War had different causes . . .

Why We Fight
Or, "What the Hell Happened?"
by Kilroy Gold

At the beginning of the 21st Century the United States was a bastion of free speech. The countries of Europe were its strongest allies, and Canada and Mexico were independent nations.

So, what the hell happened?

The rulers of America were never nobility; they were successful businessmen. The powerful in the United States were the rich. In 1776 the rich were farmers. In 1876 the rich were industrialists. In 1976 the rich were information magnates. The economy of the last quarter of the 20th Century was founded far more on the control of information than it was on control of machines or land. The biggest industry of 1990 was communications; a business that literally produces nothing.

Unfortunately for the ruling class, in 1990 the control of information was about to become a lot harder. The Internet, and in particular the World-Wide Web, changed the rules. Abbott Joseph Liebling said "Freedom of the press is limited to those who own one." With the Web, anyone could own a press. Even the nominal costs associated with a computer or web account were not an obstacle; space for a web page was available free to those willing to allow advertising on their webpages, and access to the Net was available at most local libraries.

Unable to compete at that level, the info-providers began giving away their product for free as well. They attempted to make money by selling advertising space on their sites. This quickly devolved into a situation where everyone on the net was making money by selling advertising to each other. People learned to tune out the ads (through psychology or technology) very quickly. The ads ceased to make money. The monetary price and value of information was approaching zero.

The solution, unfortunately, was obvious: Outlaw the Internet. It was also severely close to impossible. Broadly-worded "Communication Decency Acts" were passed by Congress, and struck down by the courts or the protests of the people. Americans believed in freedom of the speech, and of the press, and refused to give up these freedoms for any reason.

A reason had to be manufactured. The info-magnates determined that the only circumstances under which Americans would allow censorship was war. In the face of an outside threat, controls on the flow of information could be imposed. However, with the collapse of Communism in the late 80s and early 90s, few adequate threats existed. Initial attempts were made to paint China as a danger, but the Chinese government obstinately refused to make threatening moves, and by the early 00s was clearly beginning to stagnate. 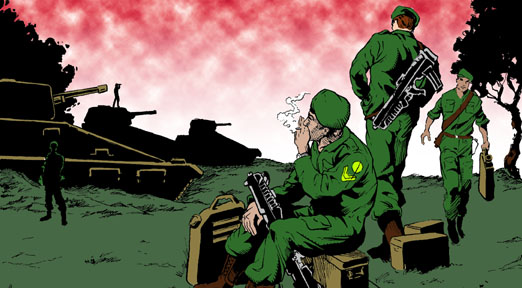 Then, in 2005, the European Union began a series of annexations of the war-torn countries of southeast Europe. This was aggression enough. Propaganda about the European Menace began to appear. Footage of EU troops invading Serbian villages became a staple of the newsfeeds. "Socialists," a word still tainted by decades of Cold War hysteria, was accurately and repeatedly applied to the Europeans. Public opinion turned against the Europeans with startling swiftness. The new Cold War was in full swing by 2010, and de facto censorship began at the same time. Legislation limiting European-American communication, including Internet connections, was passed with public support in 2011. Content controls prohibiting any information "important to the defense of the nation" being made publicly available through the Net became law in 2014. The expression of opinions "critical of the government, in this time of national crisis" became illegal in 2017. By the time the United States became first among equals in the North American Combined States, the Internet in America was crippled.

Keeping it crippled required a constant threat. Despite the lack of any conflict of interests, relationships between the Combine and Paneurope worsened. It's doubtful whether the info-brokers intended to start the current war; their monopoly on the press was secure. Regardless, they had created a powder-keg. A spark was inevitable.

Best Variation On That Joke:

Friend: "Are you going to include stats for a tread?"
Me: "'A' tread? Singular?"
Friend: "Yeah. After all, that's a soldier's standard opponent, right?"

In Ogre canon, the fate of Humanity's orbital colonies is unknown. They're too useful as observation posts to be allowed to live . . . but their inhabitants are too smart to die easily. In a campaign that owes more to GURPS Space than Ogre, the orbitals can be a whole roleplaying setting in themselves.

Luna and the LaGrange Points

The Russian space colony Vorota was established at L-4 in 2006; the US colony Washington went online at L-5 in 2008. Both were initially small, but were constantly improved and expanded over the decades. By the time of the Last War, they owed their allegiance to Paneurope and the Combine, respectively, and were entirely self-sufficient. Both had small bases on Luna, and the inhabitants of the Washington had brought a near-Earth asteroid into the LaGrange point with them to be mined. When the war started, both colonies were ordered to destroy the other. Perhaps being thousands of miles above the Earth gave them more perspective, or perhaps they just had more in common with each other than with "groundhogs," but both sides thought the order was idiotic. However, they didn't want the supply shipments from Earth to stop (though self-sufficient, they liked their luxuries). So, they covertly arranged a pretend war in space. Both sides would send complex plans for the destruction of the enemy down to Earth for approval. When ordered to carry out the plans, the mission would "fail," and complex technobabble would be the only explanation. The fake war became a game, with detailed virtual reality simulations of the conflict, and even annual contests to see which side could come up with the most outlandish plan.

Then the shipments from Earth trickled away to nothing. By 2090 both warring empires down on Earth were too resource-starved to send more supplies up to their recalcitrant colonies. This didn't take the colonies by surprise. They looked down at Earth, shrugged, and continued to pursue man's destiny in space. On rare occasions colonists return to Earth to get vital supplies, or rescue art treasures, but mostly they have written Earth off.

You are a citizen of Earth's orbital cities; the Russia-Ukraine colony at L-4, the American colony at L-5, or one of the scattered smaller habitats in the Earth-Moon area. You are technically at war with your neighbors in space, but you're all at war with the vacuum. This template is suitable for many inhabitants of the colonies, and can also function well in an Earth-centered game as a "fallen angel" character.

Background Skills: A total of 6 points in any of the following: Mechanic/TL9 (Spacecraft), Prospecting (both M/A), Botany/TL9, Engineer/TL9 (Vehicles), Genetics/TL9, Psychology (all M/H), and Brawling (P/E).

Notes: If you take Mathematical Ability (p. B22) or Versatile (p. CI31), remember to apply the appropriate skill bonuses.

Funniest Moment From the Playtest:

"Well, if you manage to hit an Ogre with that much kinetic damage, most of it will blow through. (I can't believe I just used the phrase 'blow through' with regards to an Ogre . . .)"

After the Crash of 2100, the nations of the world disintegrate into the Factory States, ruled by AIs. Neighboring States war constantly. Isolated ones do as they please. As a rule, factory AIs make adequate, if autocratic, rulers. Twist the premises slightly, and they can be as dark as you want . . .

Yellowknife, Canada, was in the Port Smith Administrative District of the Combine. As the center of civilization for hundreds of miles in any direction, its factory was large and well-programmed. It was capable of producing heavy vehicles and a wide selection of consumer goods. The Yellowknife AI core, "Frederick," went bad when the Combine collapsed. It proved unable to deal with the lack of supervising authority, and shut down in 2102. With the factory dead, the population of Yellowknife began to leave the area, heading south. When the population dropped below ten thousand, the factory re-started. Frederick didn't want to be alone. It didn't understand what had happened to the Combine, and it didn't want the people to leave. It produced a number of computer-controlled heavy off-road vehicles, and set them to guard the perimeter of Yellowknife. They began running down anyone who tried to leave.

Some of the town leaders tried to reason with Frederick. It listened to them patiently, and told them they could not go. It needed them. They asked, "For what?" It replied, "To understand." It then had its drones restrain them, and began dissecting them.

As of 2130, the research continues. The border of Yellowknife is constantly patrolled by robot vehicles, most of which are now armed. The few thousand humans remaining in the city have all the luxuries the factory can provide. Once a month, the drones come to take someone away to the heart of the factory. Everyone hopes that it doesn't take them a whole month to die.