Across The Faerie Veil

by James Cambias and Phil Masters

When Steve Jackson Games acquired the license to publish a GURPS version of R. Talsorian's Castle Falkenstein, they had an obvious problem to solve: there was a full-scale game already out there, complete with a half-dozen supplements, and the new book was going to have to be consistent not only with the specific contents of those books, but also with the feel and "traditions" of the old game. The whole point of the license was that Castle Falkenstein is a game with a following, a fan base; losing what made it so popular would have been a mistake.

Perhaps fortunately, the company knew a couple of authors who'd written for both GURPS and Falkenstein, and we were able to do the job on the timescale that the company wanted. As a bonus, because we had both written Castle Falkenstein supplements that had not been published when R. Talsorian Games put the line on hold, we were able to add a certain amount of previously-unpublished material to the mix. On the other hand, that added yet more to the size of the finished project. Even after a certain amount of cutting back, this is a relatively large supplement, and some things never made it into the final draft. One particularly interesting cut item was a discussion of how the parachronic explorers of Infinity Unlimited (from GURPS Time Travel) would deal with the unique perils and opportunities of the Castle Falkenstein universe.

The world of GURPS Castle Falkenstein is a rich and interesting campaign setting, but now that a GURPS adaptation exists, it can also be combined with other GURPS material. One obvious, if dramatic, possibility involves the "Infinity Unlimited" setting described in GURPS Time Travel. Suppose that Infinity and its corps of Paracops stumbled across this parallel?

As soon as parachronic explorers finish surveying the world code-named Falkenstein, Infinity would surely wish to keep it secret, for several reasons. First, all "weird parallels" with magic or other supernatural powers are considered very dangerous, and Infinity doesn't want casual visitors meddling with powers they don't understand. Second, the Castle Falkenstein world already has factions capable of a form of parachronic travel themselves. The Faerie visit other worlds through the Faerie Veil, and magicians appear to be able to reach other realities. Infinity and the Paracops have enough on their plate coping with Centrum's agents, and adding multiple Falkensteinian explorers with their own conflicting agendas would only create headaches for the Infinity Council.

However, it may be impossible to keep Falkenstein entirely under wraps. The chance to study magic in a world which has already begun to apply scientific methods to sorcery would be very tempting, and technical experts might want to learn more about Falkenstein's weird steampunk technology, or even the secrets of Engine Magick. Finally, Falkenstein seems to be a whole universe with the Weirdness Magnet disadvantage. Despite Infinity's best efforts, parachronic traders and Time Tours groups may wind up blundering into New Europa. Once word leaks out, it will be hard to ban Time Tours from running package tours of Falkenstein for Victorian-wannabes and fantasy fans. Consider how much people would pay for the chance to meet fictional characters like Captain Nemo and Sherlock Holmes . . . or Count Dracula.

The discovery of not one but two non-human factions with inter-universal travel (the Seelie and Unseelie faeries), and magicians with similar powers, is close to Infinity's worst nightmare: parachronic travellers completely outside their control. The only relief would be that magicians and faeries seem severely restricted in the range of worlds they can reach, and their powers may not work in most universes.

The Falkensteinians also seem to insist that their interdimensional travels take them through a region of "pure energy," the so-called "Faerie Veil," which does not seem to correspond to Infinity's understanding of how parachronic travel works. Perhaps Infinity Inc. technology traverses this region instantly, leaving its users none the wiser, or perhaps the Veil is itself a parallel universe, with extremely unusual natural laws. Interestingly, all the material worlds visited by the Faerie seem to follow the same general course of history, even though their physical laws vary widely. Perhaps the Veil only allows access to a limited number of worlds, or perhaps the Faerie simply don't have enough imagination to find weirder alternates.

Falkenstein's numerous inventors and scientific masterminds may be more difficult to control. Once a Falkensteinian inventor gets the idea that interdimensional travel is possible, it's only a matter of time before a jerry-built conveyor controlled by brass levers and powered by banks of sputtering electric cells goes careening across the time streams. The risk isn't so much what a party of stalwart Victorian adventurers might do, but the thought of such a home-built device falling into the hands of the good people of Shikaku-Mon or Reich-5 is enough to give even a Centrum agent nightmares! To keep the Secret, Infinity's Paracops may have to kidnap a few scientific geniuses from their Falkenstein laboratories, and perhaps destroy some manuscripts before their eccentric scientist authors can submit them to the Royal Society. Heroic characters in a GURPS Castle Falkenstein campaign may be called in to investigate the mysterious rash of disappearing inventors, and may find themselves doing battle with the fiendish Invaders From Beyond Time!

Infinity's agents may have some trouble learning the true state of affairs in Falkenstein. If they simply stop in the British Museum and grab some encyclopedias to take home, they will learn nothing about such major factions as the Second Compact, the alliance between the Unseelie and the Prussians, or the menace of the World Crime League. Agents in a followup team may well think they are visiting a relatively harmless Victorian parallel, until a Criminal Mastermind or Dark Lord decides to take them captive and learn about their outtime technology. 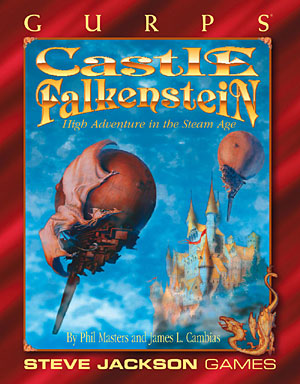 The Secret Is Out

Once the threat of the Unseelie is understood, an alliance with the Second Compact would seem very attractive, and to blazes with the risk of giving the Seelie too much knowledge. Various Homeline governments might try to befriend their Falkenstein equivalents; in the case of the United States, the extent of secret Freemason control might not be apparent to a casual inspection, and the hidden rulers of Falkenstein America would love to get TL8 weapons from Homeline's USA to deal with the Twenty Nations once and for all. In the case of the United Kingdom, the British Empire of Falkenstein might wish to help its "fallen" Homeline twin regain its rightful position as leader of the world!

The knowledge that their world is considered a quaint and old-fashioned place by the people of Homeline could either be a devastating blow to the confidence and optimism of Falkenstein's leaders . . . or might stimulate empire-builders to seek out new opportunities beyond the Faerie Veil. On the other hand, the fact that Infinity and Homeline have almost no knowledge of Magick would certainly increase the prestige of the various Sorcerous Orders, and it is possible that the governments of Falkenstein would try to balance the superior technology of the outworlders with magic.

Falkenstein is probably on a Quantum level inaccessible to Centrum; if not, Centrum's rationalist distaste for magic would likely lead them to ignore it anyway. However, if they did intervene, they might support the British Steam Lords and American Freemasons in the quest to construct a rational, English-speaking world government. This would logically lead to Centrum allying with Infinity and the Second Compact against the Unseelie, but it would probably be a highly uncertain partnership, rife with distrust and double-dealing. Centrum's agents are dangerously inexperienced in negotiation with powerful nonhuman beings, while the Unseelie have centuries of practice in tricking and manipulating mortals. The Adversary might well fool them completely, making Centrum think they were pulling the strings even as they did exactly what he wants. Once discovered, an Unseelie-Centrum axis would cause Infinity to hit the panic button, hard!

In this context, hitting the panic button would probably involve overt military action by Infinity and the Homeline great powers on a number of parallel worlds including Falkenstein itself. The cost of transport would make it impossible to deploy overwhelming force, but regiment-sized cadres of early TL8 units working in conjunction with local allies would be a potent force. Gamemasters who like to run military campaigns can have lots of fun exploring the potential of tanks and helicopter gunships (supported by dragons, flying cavalry and the awesome Verne Cannon), pitted against steam Landfortresses, pirate airships, and the Wild Hunt!