Art by Dan Smith and colored by Keith Johnson

"Tell me, O muse, of that ingenious hero who travelled far and wide after he had sacked the famous town of Troy."
-- The Odyssey, Book I

Odysseus, was one of the greatest heroes of Ancient Greece and of Western Literature. A favorite of Athena, general in the Trojan War and subject of one of the greatest epics of all time, Odysseus was a "master in all ways of contending." And he still is. 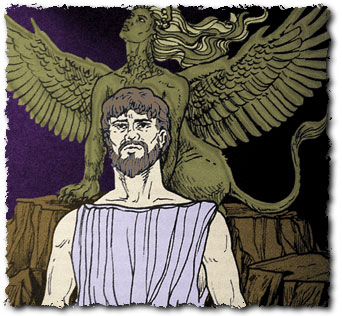 Odysseus was the son of Laertes and king of Ithaca. An unparalleled tactician and cunning warrior, Odysseus was one of those rare mortals that were born with six Forces. His legendary shrewdness made him a favorite to the goddess Athena, who often came to his aid.

The central event in Odysseus' life was the Trojan War and, from what the stories say, Odysseus was wrapped up in almost every facet of it. He was originally one of the suitors for the beautiful Helen and it was he who suggested that Menelaus get the oath of the unsuccessful suitors to protect the marriage, thus requiring they do nothing to obtain Helen for themselves.

It was also to Odysseus that the goddesses Athena, Hera, and Aphrodite came to with the Golden Apple of Discord so that he could choose which of them was the prettiest. Odysseus, being the clever Athenian lad that he was, realized the amount of trouble he could get himself into with this little contest. So he claimed that he could not be objective, being that Athena was his patron goddess. Thus the trio went on to find another judge.

They found a Trojan named Paris and he choose Aphrodite, since Aphrodite promised him the most beautiful woman in the world if he choose her. Thus, Paris absconded with the aforementioned Helen back to Troy and sparking the Trojan War as Menelaus and his oathbound compatriots pursued. Odysseus himself was not in favor of going to Troy. When messengers came to inform Odysseus that Menelaus was calling on his oath, Odysseus pretends to be insane. Only when the messengers put Odysseus' son in danger did he drop the ruse so he could save the life of his son.

At Troy, Odysseus continued to distinguish himself among his comrades, eventually devising the famous Trojan Horse so that the Athenians could sneak into Troy. (For a full history of the Trojan War, see The Illiad, by Homer) However, Odysseus was the only of the surviving Athenian heroes not to return after the Trojan War. It took him ten years to return to Ithaca, due to the fact that Odysseus had angered the Greek god Poseidon. The story of what exactly he had to endure is Homer's Odyssey, one of the greatest works of ancient Western Literature. For exactly what happened there, you should read the Odyssy. Mythweb has both excellent summaries and detailed information (http://www.mythweb.com/odyssey/index.html). Some in Heaven believe his story is actually a chronicle of his travels through the Deep Marches.

After dying, Odysseus found that Poseidon's ill will continued -- he could not pass on to his final reward. He was so fixated on Poseidon's anger that he could not allow himself to ascend to Heaven, nor would Poseidon allow him to serve Athena in the Marches. He became a dream shade and wandered through the Far Marches for millennia, trying to find some way to be allowed into Mount Olympus or to pass onto the Heavens.

His wanderings among the Ethereal plane became just as legendary, and convoluted, as his Corporeal Odyssey had become. Some stories talk of a duel with Laurence in which Odysseus survived by fighting dishonorably. Others describe Odysseus sneaking into Hell to see if he could find Achilles among the souls in Gehenna. Several former Malakim of Purity report seeing Odysseus fighting along the side of the Greek gods during Uriel's Purity Crusade.

What is definite is that the first confirmed report of Odysseus in the Corporeal plane was in the 19th century, when a group of angels conflicted with him as he was attempting to incite a conflict between celestials in Constantinople. Since that time, celestials on both sides have run into Odysseus, usually on the losing end of one of his many schemes.

Odysseus is, essentially, a dream-shade that has developed himself to 9 Forces the hard way. And he has managed to acquire a vessel somewhere. The list of skills and songs above is merely a starting point -- the GM should feel to change that list as needed and to make Odysseus more appropriate for the setting of the campaign. The general idea is that Odysseus has been around for a long time and has picked up a lot. He should be proficient in all of the little details of life (like driving, using guns, etc.) as well as familiar with the local languages. Only in specialized areas should he be completely out of his element. He is a "master in all ways of contending," after all.

The most defining characteristic of Odysseus is his cunning. He's not a scholar or philosopher, but rather a clever tactician and an engaging orator. No matter what is going on, Odysseus is trying to find the angle and figure out how to come out on top. He was good enough to impress Athena when he was alive and he's even better now. Almost as pervasive as his cunning is his confidence. Odysseus has been through Hell (some say literally) and come out of all of them (eventually) in one piece. He is adaptable, learns quickly, charismatic, determined and he knows it.

But like most Hellenic heroes, he does have several flaws. His confidence very often inflates into overconfidence. Despite his caution and wit, Odysseus will often gloat or taunt his opponents, leaving himself vulnerable in someway or giving out a critical piece of information. Sometimes he does this intentionally, either to further one of his plots or to just to make sure the game continues -- Odysseus respects worthy opponents and loves a challenge. However, if his continued existence is at stake, he will pull out every stop to get out.

Additionally, Odysseus has some of the worst luck in history. Unfortunate events happen to him frequently, leaving him stranded, in the clutches of some monster or demon or such. Odysseus is a master of escaping these situations, but his companions usually are not as competent. Thus, Odysseus is usually found working by himself.

Odysseus is still a product of Ancient Greek society. Honor is important (as long as he is still alive to enjoy being honorable). He reacts better to good-looking people and still believes in some ways that truth equals beauty. He also views himself as better than almost all mortals. The fact that he is still legendary is something he is quite proud of.

Odysseus can be an NPC in almost any capacity. He works well as a continuing opponent for a group on either side of the War. Or as an ally. Or both at the same time. PCs could get caught up in one of his misadventures, or become pawns in one of his schemes. In any of these cases, you can play him as a dangerous rebel, a misguided hero, or a dashing anti-hero.

As a dangerous rebel, Odysseus is on his own side above all else. Rejected by his gods as well as Heaven and Hell, he only concern is to stay alive and make trouble for those who have wronged him. Odysseus will side with whomever is winning and maximize what he gets out of whatever situation he is in. He will hold a grudge until his Forces are disbanded.

As the misguided hero, Odysseus is just trying to survive and find a way to pass on to his ultimate reward. He is convinced that he must have the permission of Poseidon to pass on, and he is tired of this existence. He values honor and will help those he finds worthy when he can, but will still do what he can to save himself. He will avoid dealing with the Infernal elements unless he knows he can get the upper hand, but will be generally sympathetic to angels unless they antagonize him.

As the dashing anti-hero, Odysseus is a sort of swashbuckler and wandering man-at-arms. His main goal will be to help his patron, Athena, and to convince Poseidon to lift his curse. He a gentleman villain, fighting both sides, but occasionally helping out honorable and competent opponents and pausing to sweep a woman off her feet.

But no matter what happens (unless it is a major plot point), Odysseus should get away to fight another day.