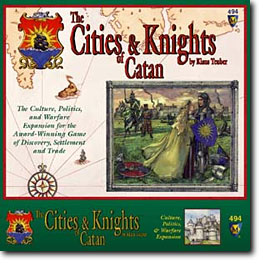 In 1995, Klaus Teuber's board game The Settlers of Catan won Germany's most prestigious game award, the Spiel des Jahres (Game of the Year). Mayfair Games' English translation of the game won the American Game of the Year Award the following year. The game is widely regarded as being responsible for American interest in other "German" games, such as those published (in English) by Rio Grande Games. Now, Mayfair has given us Klaus Teuber's newest expansion to the game, The Cities and Knights of Catan. Cities and Knights is a wonderful addition to an already classic game, and adds strategic depth without sacrificing any of the basic game's simplicity.

The first thing you'll notice about Cities and Knights is the presence of the Barbarian Horde tile. This special double-hex tile replaces one of the standard water hexes at the edge of the island, and is used to track the progress of the barbarian fleet as it approaches Catan. Every time the special Event die comes up with the black ship (three of the six faces), the barbarians move a little bit closer to Catan.