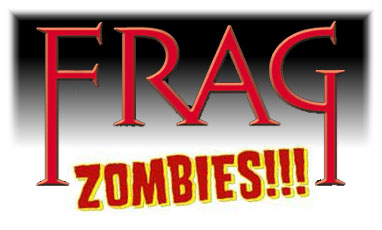 A Set of Rules for Combining Frag and Zombies!!!

"Frag Zombies!!!" is a rule set that combines Steve Jackson Games' computerless first-person shooter Frag with Journeyman Press' B-movie action boardgame Zombies!!!. To use these rules you will need both games. The Frag expansion Death Match, while useful (for the extra Frag cards), is not necessary to play.

To play Frag Zombies!!! you will be using:

The Weapons, Gadgets, and Zombies!!! Event Deck are shuffled and each player is dealt one card from each deck. The Frag Specials cards are not used in Frag Zombies!!! and should be set out of the way. The following cards are removed from the Gadget deck.

Each player selects a pawn and places it in the center space on the Town Square tile. This is the only space in the game where more than one player is allowed to be at a time. This is also the only respawn point where fragged players reappear as the game progresses.

Each turn a player may do each of the following (in order):

Unlike Frag, fighters in Frag Zombies!!! only move a number of spaces during their turn equal to their Speed attribute. This distance can be modified with Gadget and/or Event Cards. There is no jumping in Frag Zombies!!!

Unlike in Zombies!!!, moving into a space with a zombie does not stop your movement. As in Frag, you may move through these occupied spaces.

Doors in Frag Zombies!!! are always open and do not block LOS. How else would all of those zombies be loose in so many buildings at once?

Movement is otherwise treated identically as in Frag.

Zombie Pool: The zombie pool is the number of zombies remaining to be placed on the map tiles. At the start of the game, the zombie pool is all 100 plastic zombies included in the Zombies!!! game. As zombies are placed on the map tiles the pool decreases. Fragged zombies do not return to the pool but are instead hoarded by the player who made the frag. Fragging zombies is one of the ways to win the game (see Winning the Game, below).

Zombies in Combat: All zombies have Health 1 and can only attack an opponent in an adjacent space (they have no ranged attack abilities). Zombies do not roll dice to hit (all zombie attacks are automatic hits) and they roll 2 dice for damage.

Zombie Stacking: Unlike the fighters, any number of zombies may end a turn in a space or may even end a turn in the same space as a fighter. The cards This Isn't So Bad and Zombie Master may not be used to stack zombies in a space.

In Frag Zombies!!!, the Zombies!!! Card Event Deck takes the place of the Frag specials deck. Each player starts with one card from the Card Event Deck and earns an additional card for each zombie frag they make. Fragging other players does not earn a player cards. As in Frag, a player may not have more than five cards in his hand at the end of his turn. A player may have, in play, no more than 3 cards from the Event Deck at any time. Activating one of these in play cards does not count as playing a card for that turn.

A lot of the cards in Zombies!!! are easy to use with the Frag rules and don't require any special rules. For those cards and rules that do need some modification and clarification for a Frag game, the following will come in handy.

Generic Rules Applicable to Many Cards

Butter Fingers -- Play at any time. The target player must discard one card from his hand or already in play. Discard after use.

Chainsaw -- Play only when you are in the Lawn and Garden Center. For the remainder of the game you are considered to have a chainsaw weapon card in play that does not count against your weapon limit. Take one Chainsaw card from the weapon deck and place it beside your record sheet.

First Aid Kit -- Play only when you are in the Hospital or Drug Store. Roll 1d6 and collect that number of Blood Counters which you may use at any time during the game. Discard after use.

Grenade -- Play only when you are in the Army Surplus Store. This card remains in play and available until you are fragged or you choose to discard it. Discarding this card frags all zombies in a building. You score the frags (and draw one card from the Event Deck for each frag) but must also lose 1 Health.

I Don't Think They're Dead . . . -- Play at the beginning of any player's turn. That player must frag two zombies before the end of his turn or return two earlier fragged zombies to the zombie pool. Discard after use.

Lots of Ammo -- Play only when you are in the Sporting Goods Store. Discard this card to either reload all of your weapons in play or draw one weapon card. Discard after use.

Much Needed Rest -- Play at the beginning of your turn before movement. You do not move this turn but instead gain 2 Health (this may take you higher than your starting Health). Discard after use.

Skateboard -- Play only when you are in the Skate Shop. As long as this card is in play all of the player's movement is at +2. This card remains in play until the player is fragged.