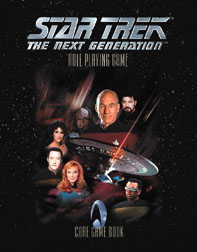 "Space, the final frontier. These are the voyages..." of the newest Star Trek Role Playing Game, produced by Last Unicorn Games, the creators of the incredibly detailed Aria fantasy campaign system. The game gives players the opportunity to take the helm of a Federation starship and "boldly go where no one has gone before." The game is based on the "Star Trek: the Next Generation" television series. Last Unicorn is planning additional games based the original Star Trek series, Deep Space Nine and Voyager.

The ST:TNG RPG (how's that for an abbreviation?) captures the feel of the Next Generation television show right off. The cover is striking and the graphics throughout impressive, done in the "Starfleet" style of icons created for the series. The interior is full-color, illustrated with video-stills taken from the television episodes along with some decent color art. Most of the artwork is spot illustrations, enhancing the text without detracting from it.

The game system itself is fairly straightforward. Characters have numerical ratings from 1 to 5 in their various attributes and skills. When a character performs an action, the player rolls a test using a number of six-sided dice equal to the character's (attribute + skill) and adds the highest roll to the character's ability . . .