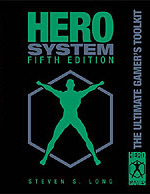 According to my battered, tape-covered, well thumbed Champions! hardcover, the Fourth Edition of the Hero System came out in 1989. Now, thirteen years is a long time for a new edition, but for its fans it's probably more than worth the wait.

The bulk of the Hero System book is its character creation system, perhaps one of the most robust ever . . . if you aren't afraid of math. Originally designed as a superhero game, the core of the Hero System is based around one concept: It's impossible to cover every possible superpower, skill, or ability separately while guaranteeing it does what the player wants. For example, consider a fireblast power: Suppose one player wants to be able to throw balls of fire that set enemies on fire in an area effect, doing damage each turn to the enemy as they're set on fire. Another player wants that fireblast to do some damage, but be more effective than normal since it bypasses armor (since the fire ignores armor). Still another player merely wants the power to be a special effect, and simply deal a bunch of damage all at once. In a game which tries to define a Fireblast power with a set ability, at least one (and possibly both . . . or all!) of the folks above will be disappointed, since the power doesn't do . . .