Primary Sources -- A Fire Upon the Deep

Maps created by Elisa Mitchell,
used with the permission of the artist

Light travels at different speeds through different mediums - quickly through gas, more slowly through liquids. It moves at 186,000 miles per second through a vacuum, and as far as we know, this is the final barrier we have to vainly fight. The speed of light is the one great rule, simply expressed and strictly enforced.

A Fire Upon the Deep is a grand novel of a vast interstellar network, billions of years old, which has seen countless civilizations reach sentience, flourish, mature and become extinct. This novel promises to be the first of a series, spanning a unique realm of space and thought. Though the writing and the ideas expressed by Mr. Vinge shine with newness, he illustrates an ancient and beautiful, if somewhat dangerous, universe that science-fiction gamers will appreciate. Many of the ideas will be familiar to roleplayers, but those interested in a stronger conceptual background to their campaigns, as well as new rules for the Way Things Work, should be very excited about his carefully planned, thoughtfully constructed view of the nature of space.


The Zones of Thought 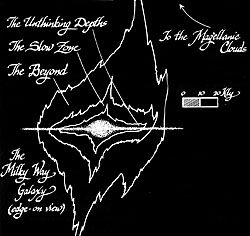 The speed of light, he proposes, as well as other physical laws, are not uniform. There are different zones of thought which define and restrict the races that inhabit them: the Unthinking Depths, the Slow Zone, the Beyond and the Transcend, which lies outside the limits of human experience (see the diagrams on the next page). Most of the action in the novel takes place in the Beyond, on the periphery of the Milky Way galaxy, where technological miracles can be operated. Beyond the Beyond, into the Transcend, few creatures of our limited intelligence have ever ventured; this is the realm of the Powers, who have transcended mere sentience and rarely involve themselves in our affairs. Many universities offer courses in Applied Theology, most of which consist of, "If you meet a Power, run."

There are different levels to each zone, which define the technology that can be produced or operated there. For example, in the areas between the Slow Zone and the Beyond, marvels like anti-gravity fabric can be used, but not produced, and they decay to the point of uselessness within months. These worlds exist on the fringe of galactic society, halfway between the shining lights and the great darkness.

Civilization in the Beyond is based on virtually instantaneous communication across incredible stellar distances. And in the Transcend, there exist hyperintelligent constructs and limitless sources of energy. This is truly the place of miracles, where the tiniest program can bootstrap its way to intelligence, and monstrous, synthetic deviants can spring from a simple, careless action - as a small group of human researchers found, while cataloging a billion-year-old archive just beyond the Beyond.

The Plot
A group of human researchers stumble upon a database promising information about a mysterious, ancient technology, lost to the archives of the Net. They were instead tricked into following a recipe for the reconstruction of a great old Power, a deviant who wants not only to have a hand in the affairs of intelligent beings but to control them utterly. 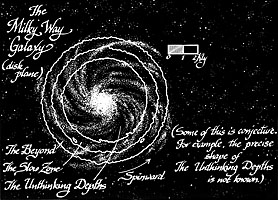 The plot of the novel follows two primary storylines. The first concerns two children, refugees from the human settlement that accidentally created the rogue Power (later dubbed the Blight) who have crashed on a low-tech, alien-inhabited planet along the interior edge of the Beyond - out of the immediate reach of the new, transcendent Power.

The other storyline follows a group from the middle of the Beyond: a young woman; two alien Skrode- riders; and a man from the Slow Zone who was reconstructed from spare parts by a Power - all are in a desperate race against the agents of the Blight to find the castaway children and recover what it's hoped the adults sent with them - a missing piece of the degenerate Power, and perhaps the key to its destruction.

The Net
The unifying element of the worlds presented in the novel, the Net, will be immediately familiar to users of the Internet, but interstellar news groups and optional sensory evocation add a more personal touch to your messaging.

It is the Net that gives you a sense of the scope of the novel, as nodes from a thousand worlds send their news through the links at Relay, an information services provider for this arm of the Milky Way galaxy. Important plot elements are discussed and debated by minor characters as civilizations fall under the thrall of the perverse Power.

One of the more humorous elements of Net traffic - and realistic, to long-time users of modern electronic networks - are the posts from the occasional users without clues, amid threads of speculation and tales of destruction, who plainly believe they're contributing to the conversation. It's both relieving and unsettling to know that in the future, there's still no cure for pure ignorance.

As an interesting aside, an enterprising GM could easily manufacture a regular stream of Net traffic to feed his players game clues, as well as random, useless information.

The Tines
The shipwrecked children, a brother and a sister, see their parents killed and find themselves captured by a very intelligent, dog-like race called the Tines. One of the most unique alien races to come out of science fiction in years, an individual tine is not much, just a fragment of a personality. But a pack, usually four to six tines, is a person - a communal mind that shares its thoughts among its members. Their mouths, which packs can use in concert in lieu of fingers, are flexible enough to produce both the quick, clipped barks that comprise their language and perfectly mimic human speech as well.

The Tines, though an extremely intelligent race, are stuck at a medieval technology level. Packs have a hard time cooperating in close quarters, because when they get too close, they begin "hearing" the other packs' thoughts. For the Tines, invading the 10- to 15-foot-wide area of personal space around a pack can be a chaotic, mind-wrenching experience that can bring confusion, embarrassment and loss of identity.

As the novel begins, two warring factions - the spartan Flenserites and the cultured Woodcarvers - have each captured one of the children. Neither sibling knows the other is still alive.

Starships stream towards the planet, while the native factions race each other to develop the technology taught to them by humans, and use it to conquer the opposing side. The starships get closer as the war on the planet threatens to destroy what remains of the crashed ship and its delicate cargo: the last hope of saving the Net from the Power that threatens it. 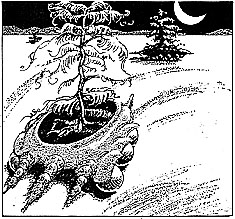 Besides the Tines, many other races are introduced. The Skroderiders are one of the more interesting: master traders amongst the stars. They appear to be tiny, ornamental trees, planted in six-wheeled carts and rustling their fronds to create a twittering semblance of speech.

The Skroderiders originally lived along beaches, rooted firmly at the tide line, letting their minds go with the calming rhythm of the waves. With another race's gift of the skrodes, cybernetically grafted carts that grant them their mobility, they are traders across the stars, with a reputation for being pleasant, polite and noble.

While this is all true, there is much more to their billion-year-old origin than was ever suspected. Their true beginnings are slowly revealed during the rush towards the inner edge of the Beyond, where light slows to the frustrating crawl of 186,000 miles per second.

It doesn't take much to see the inherent potential in such a background. But what will make the difference between traditional high space opera and the elegance of A Fire Upon the Deep is the finesse with which the GM can illustrate the differences between the people, the places and the things in various zones of space.

Present the obvious contrast between ultra technology and the lower tech levels on the edge of the Slow Zone, in use side by side. Contrasts like this add a lot of texture to an otherwise "normal" space game. Imagine infant civilizations trading their next century's gross global profit for the tools to connect their back-water world to the interstellar net; or a society based in the Upper Beyond that, through a Power's accidental intervention, has crippled their gene pool and must rely on a low-tech, Upper Slow Zone race with similar germ plasm to revitalize their race. Both of these simple scenarios could provide endless subplots for characters to explore.

It is science - its principals and its execution - which makes A Fire Upon the Deep such a remarkable gaming environment. It's full of technological miracles that so many people, your players included, will take for granted. And yet at the same time, there are infant races experimenting with gunpowder for the first time and feeling the excitement of the knowledge that they are not alone in the universe.

The people in Vinge's novel, like ourselves, exist in an age of miracles. Many in both worlds feel misplaced, useless and obsolete in an era of such advances. The world of A Fire Upon the Deep illustrates to us the difference any of us can make, from any background. Just because you live in an age of miracles, doesn't mean you can't make your own.