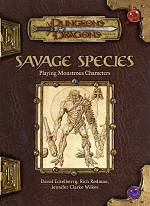 Have you ever wanted to play a Lizardman shaman? How about a sentient golem, or a renegade demon? How many fascinating and unique character concepts have you had to discard simply because they were too difficult, if not impossible, to translate into game mechanics?

Savage Species opens up new avenues of play by allowing nearly any creature in the MM to be used as a player character race. The heart of the system presented in the book is rules to determine the effective character level any given monster. This is accomplished by adding the monster's hit dice to a level adjustment that reflects a level balance for any special abilities the creature may have. The result is the monster's effective character level (ECL). Character classes may be added as normal to bring the character up to the average party level. The system is simple and straightforward, and the rules include several examples, including the creation of an ECL 5 Bugbear Barbarian from start to finish. The resulting character is intended to join a party of 5th-level adventurers.

The book also presents an innovative alternative to monster advancement and regression by introducing the concept of monster levels. Each monster race has its own racial character class consisting of a number of class levels equal to its hit dice plus its level adjustment. The rules are explained . . .

Copyright © 2003 by Steve Jackson Games. All rights reserved. Pyramid subscribers are permitted to read this article online, or download it and print out a single hardcopy for personal use. Copying this text to any other online system or BBS, or making more than one hardcopy, is strictly prohibited. So please don't. And if you encounter copies of this article elsewhere on the web, please report it to webmaster@sjgames.com.