This article originally appeared in Pyramid #11 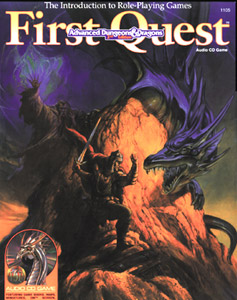 When other companies saw that TSR had introduced a line of Advanced Dungeons & Dragons boxed sets that included an audio CD, I'm sure that many of them said, "why didn't we think of that?" (and just as quickly came the answer, "because we didn't have the money, dummy."). Well, TSR did have the money, and they were willing to spend it on an experimental application of a relatively new technology.

First Quest, subtitled "The Introduction to Role-Playing Games," is a natural first product — a boxed set that attempts to teach the basics of AD&D (and roleplaying in general) to players who have had no contact with an RPG before. This is the Holy Grail of RPG game design — the game that teaches itself — and First Quest is the closest anyone's come to it yet.

The First Quest CD starts off with a long track that serves as an introduction to the idea of roleplaying. With the help of a narrator, a group of kids act out a brief roleplaying session to give the listeners an idea as to how things are supposed to go. The kids sound like kids — they interrupt each other, talk in the background, laugh at stupid jokes and have fun. The script writers did a good job of making this sample session sound real, not like some wooden radio play.