This article originally appeared in Pyramid #17 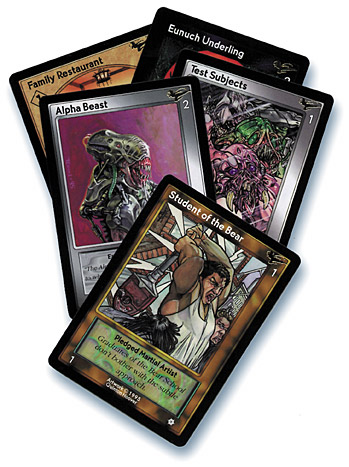 In the summer of 1993, there was just one trading card game (and you know which one that is); one year later, the first couple of bandwagon-hoppers had made it to market. By the summer of 1995, there were more games than I could count. The market is officially glutted, friends, and it's no longer good enough to just be there, to just exist, in order to prosper. Today, if a card game's going to be a hit, it has to have something special going for it.

Shadowfist is one of those games.

The premise is simple. Each player controls the forces of a hundred weird kung-fu movies, with a little cyberpunk and horror thrown in, in a battle to be the first to control or destroy a combination of six feng shui sites, mystical sites of magical power. And as a nice rules addition to keep people from "turtling up" and cruising to victory on the strength of their own deck, the sixth and final feng shui site must be obtained (or destroyed) from another player — so it's definitely a fight to the finish.

The game plays a little like Magic: cards are turned sideways when they attack or defend (or, sometimes, when using a special ability), and can't be used again until they're unturned. Instead of different colors of mana to bring cards into play, you have to use a combination of Power (granted each turn by the feng shui sites you have in play, and . . .