This article originally appeared in Pyramid #20 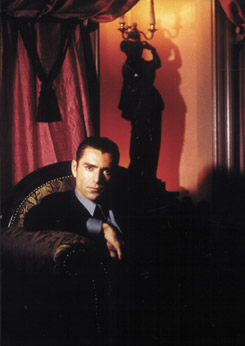 First of all, for better or worse, this show is a pretty major milestone in the history of RPGs. For the first time, a fiction originally created for a roleplaying game has made the crossover to adult, mainstream popular culture. The genie is now officially out of the bottle.

For those of you who've spent the last few weeks in a Himalayan lamasery, Kindred: The Embraced is the new Fox series based on White Wolf's Vampire: The Masquerade. The show is from the stable of überproducer Aaron Spelling, currently best known for the soapsy Beverly Hills: 90210 and Melrose Place. White Wolf co-founder Mark Rein•Hagen gets an associate producer credit, as well as a "Based on the book Vampire: The Masquerade by Mark Rein•Hagen" in the credits.

A gamer immediately has two questions about Kindred. Does it really have anything to do with the game? And, of course, is it any good?

The answer to the first question is an unequivocal yes. In fact, the show is so firmly based on the game it's almost scary. There are differences, of course — some of them significant — but a TV show has to be (not is usually, or is regarded as, but has to be) less complex than an RPG. It has nothing to do, really, with American TV being geared for morons (though I'm not saying it isn't), it's just a matter of simple logistics. On TV, you can't check the rules when things get confusing. RPG worlds are the most complex and detailed . . .